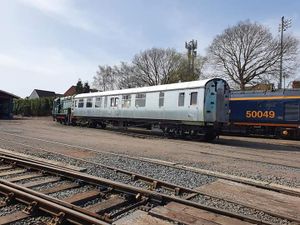 GWRGreat Western Railway 9581 is a Wheelchair accessible Buffet Car, created by rebuilding the bodyshell of GWRGreat Western Railway CollettCharles Benjamin Collett, Chief Mechanical Engineer (CME) of the Great Western Railway 1922-1941 Bow-Ended Coach No 5043, a standard 57ft full third coach originally built in June 1928 to diagram C54, lot 1383. The internal layout as built seated 64 passengers in eight compartments, with a side corridor and a toilet cubicle at each end.

As rebuilt the coach has been given a new SVRSevern Valley Railway running number ‘9581’ which reflects its rôle as a catering vehicle. In GWRGreat Western Railway days these were all numbered in the 95XX or 96XX series. The revised bodyshell is based on a GWRGreat Western Railway Diagram H33 CollettCharles Benjamin Collett, Chief Mechanical Engineer (CME) of the Great Western Railway 1922-1941 CompositeCarriage having more than one class of seating, ie First and Third or latterly First and Standard. Diner which originally seated 12 first and 24 third. The number of one of these, the long-scrapped 9581, has been chosen for the rebuild of 5043.[1] The original 9581 was in service between August 1925 and May 1959[2].

5043 was used on cross country and express services. After main line service 5043 became DW 150301 in June 1963 when, as one of a batch of six similar conversions, it was allocated to the Running and Maintenance Department and served at least part of its new existence in the Swindon breakdown train. As part of the conversion several doors and windows were blanked off and an internally operated hand brake was added.

The coach was originally bought by the 2857 Society and arrived on the SVRSevern Valley Railway by rail on 22 October 1981. It had been adapted for use as a mess coach in a breakdown train, including stripping out compartments and removing most of the internal partitions, fitting a stove and workbenches and blanking off of some of the doors and windows. On arrival, it served as the 2857 Society’s workshop, store and mess vehicle.

Ownership passed to the Great Western (SVR) Association in 2014 in a deal that saw the 2857 Society’s spares transferred to GWR 143 Tool & Packing Van, allowing the LNER Carriage Group, who are based in Bewdley Down Yard to use 5043 to use it as a workshop and stores.[3] Shortly after taking ownership the GW(SVRSevern Valley Railway)A announced its long term aspiration to convert this vehicle to a replica of a GWRGreat Western Railway CompositeCarriage having more than one class of seating, ie First and Third or latterly First and Standard. Diner to Diagram H33. The SVRSevern Valley Railway, however, requires good quality wheelchair accessible accommodation (and a GWRGreat Western Railway design Buffet Car) for set GW and the H33 design is eminently adaptable for this purpose.

Saloon accommodation for disabled passengers and their companions will be at one end and an accessible buffet counter at the other. Entry will be via central double doors with an adjacent disabled WC. The external appearance will indeed be of a GWRGreat Western Railway H33 composite Kitchen Diner (see above). It will replicate the later condition of GWRGreat Western Railway catering vehicles, which were all rebuilt in a programme that lasted from 1937 to 1952. There were many variations, but they all gained flush sided steel panelling with sliding shutters replacing the original 'hopper' type opening toplights, a much more practical arrangement that vastly reduced the window's tendency to leak.[5] The General Arrangement drawing of the proposal was prepared by the late and much missed Peter Simpson of the GW(SVRSevern Valley Railway)A to whom the LNERLondon & North Eastern Railway Carriage Group are extremely grateful.

Initial work involved sourcing fittings, undertaking a condition survey, obtaining costings, cleaning and painting the underframe and ordering a kit of bodyside frame components.[8] Work commenced in earnest following a shunt on 7 November 2017 which moved 5043 into position for restoration to commence.From 2017 to March 2010 progress was spectacular, with both sides, ends and roof rebuilt to the new configuration with new framework, replacement steel panels and fully glazed windows. Six of the eight new side doors were fitted, hung on their original hinges, genuine GWRGreat Western Railway slam locks fitted and all working correctly. All this was made possible by the financial support of both SVRSevern Valley Railway Companys and the Charitable trust. Unfortunately COVID-19) lockdowns resulted in 2020-21 being 12 months of very fragmented and slow progress and the retirement of some key volunteers. However as of November 2022 the structure of the interior is largely complete with floor, ceilings, interior partitions and seat frames all in place and mostly painted/varnished. In addition the lighting is complete and working, the steam heaters are in place, and work is progressing on the internal sliding doors.

In November 2018 it was agreed that with the rebuild more than 50% complete, the coach would subsequently be referred to by its new number 9581.[9] As of November 2022[update] work continues on the much of the interior, with the LNERLondon & North Eastern Railway Carriage Group supplemented from time-to-time by further volunteers from The 2857 Society and the Great Western (SVR) Association.[10][11]

Updates are on this webpage.

With continued support from the SVRSevern Valley Railway family the agreed programme is for the voluntary work at Bewdley Down Yard to be complete by September 2023. This won't be the end of the story as a comprehensive mechanical overhaul will be needed, followed by door lock renovation and certification, exterior painting in GWRGreat Western Railway 1930s livery, and the laying of lino throughout. The ambitious target is to have 9581 in service during 2024.