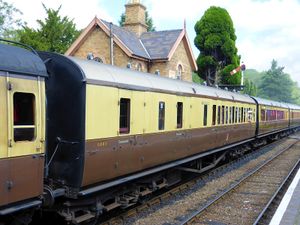 The coaches were the last 57ft body corridor stock built by the GWRGreat Western Railway and the last traditional side-corridor type with a separate outside access door to each compartment. Although the bow-end was discarded and straight body sides with standard curved bottom panels used, they were inwardly little changed, placing them in the transition between the bow-ended era and the more modern pre-war stock.[3][note 1] Both Diagram D118 examples surviving in preservation can be seen on the SVRSevern Valley Railway, the other being 5804.

5883 was one of 10 built at Swindon in 1934 as Lot 1514. It saw service with the GWRGreat Western Railway and later with BRBritish Rail or British Railways(W) renumbered as W5883W. In December 1962 it was renumbered 079135, having been transferred into the Internal UserRolling stock used for the railway’s internal purposes (stores etc.) at one fixed location. stock as an engineers' vehicle[2], ending its days as a mess van with the signal and telegraph department at Briton Ferry in South Wales[1][4].

5833 was acquired by the The Great Western (SVR) Association, arriving from Briton Ferry on 6 April 1973. Much of the interior had been gutted and the vehicle was intended to be scrapped after recovery of spares for use on the restoration of other carriages. However it was found to be in such a good structurally sound condition that it was decided to restore the carriage instead.[5]

Restoration began at Bewdley and by spring 1974 5883 had been stripped externally, with some of the panels being replaced. The internal compartment partitions had been replaced, and the lengthy process of fitting out and repainting was under way.[6] That summer the coach was one of a number of items of SVRSevern Valley Railway rolling stock requested to take part in the 150th Anniversary of the Stockton and Darlington event at Shildon in August, 1975.[7] However by that time the work was still unfinished, with restoration of the NRMNational Railway Museum’s GWRGreat Western Railway "Quick Lunch Bar Car" 9631 having taken priority.[8] 5883 was eventually completed at the end of the year, allowing an entry into SVRSevern Valley Railway service in 1976.

During 1976 the SVRSevern Valley Railway assembled a rake of 11 GWR carriages for use on the main line. The set, which included newly-restored 5883, was on around half a dozen rail tours between November 1976 and November 1978. The carriages were given TOPSTotal Operations Processing System, an American computer system adopted by BR from the late 1960s to number and manage rolling stock. numbers for main line use, with 5883 being allocated number 99230.

During 1981, 5883 spent most of the year in Bewdley paint shop undergoing an overhaul, being stripped to the frames in the process. Leaking gutters were replaced with new guttering and a number of rotten panels were also replaced. At the same time the opportunity was taken to replace the glass removed with toughened glass. All the doors were removed, stripped down and repaired before being rehung. The droplights were removed and repaired or replaced and fitted throughout with new straps. The interior of the brake end was burned off, repainted and re-grained, and the compartments and corridor re-varnished. The carriage was repainted and lettered in 1934 livery. 5883 was also reupholstered with new specially made 1934 GWRGreat Western Railway pattern material.[9]

Actress Joan Hickson travelled in one of the compartments of 5883 during filming of Miss Marple: 4:50 from Paddington in 1987.[10]

5883 underwent further repairs at Bewdley in 1991. A section of bottom stringer had to be replaced along with some of the exterior cladding sheets. The interior was in reasonable condition, needing only a few tongue-and-groove boards to be replaced in the corridor followed by repainting and re-varnishing. the interior. The carriage was then moved to Kidderminster and lifted for a bogie change, together with repairs to the draw gear, vacuum and steam heating gear.[11] Another ‘5-yearly lift’ was carried out in 1997, during which brake shafts and hangers were repaired.[12]

5883 made another television appearance when it was used in Carlton's made-for-TV movie 'Goodnight Mister Tom' in 1998 along with two other Great Western coaches.

5883 underwent another heavy overhaul in 2004. SVRSevern Valley Railway News reported that 5883 had "...broken all records for its length of stay in Kidderminster Paint Shop", a facility normally intended for quick turn-round repairs and repaints. On this occasion many of the faults found were not evident until work had started, requiring a ‘press on regardless’ approach.[13] The GW(SVRSevern Valley Railway)A website has a page documenting the work carried out during the overhaul which ended with a return to service in August 2004. Shortly afterwards 5883 was one of four carriages used in the filming of The Chronicles Of Narnia, appearing in the evacuation train behind 7802 Bradley Manor. The newly re-painted white roof was too bright for the producers so was heavily toned down for filming.

5883 is still owned by the GW(SVRSevern Valley Railway)A and is normally used in set GW2.