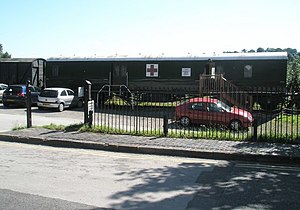 Ambulance livery at Bewdley in 2009
CollettCharles Benjamin Collett, Chief Mechanical Engineer (CME) of the Great Western Railway 1922-1941 abandoned the ‘bow-ended’ carriage design in 1933. 5804 is an early example of his later designs, dating from the following year. As built, the Brake Third Corridor seated 32 passengers in four compartments, the rest of the carriage being given over to a guard’s compartment and large luggage area.[1] During the Second World War 5804 saw service overseas as a Pharmacy Car in an Ambulance Train.

Conversion for use in Overseas Ambulance Train 34

In 1944 the GWRGreat Western Railway provided six ambulance trains of 14 coaches each for use in Europe following the Allied invasion. 5804 was one of the coaches selected for this purpose, its conversion for use as a Pharmacy Car taking place in early 1944. Internally the coach was stripped and new partitions installed to create a pharmacy room, dressing room, sterilizing room, two store rooms and a toilet. The dressing room had a large sliding door to allow easy access from the corridor for stretchers. Sinks in the pharmacy and sterilizing rooms were fed from 75 gallon tanks installed in the roof. Externally, all doors on the non-corridor side were sealed while the corridor side retained one single door and two double doors. The livery was matt olive green with a grey roof, and a large red cross on a white background painted on the roof and sides. Westinghouse air brake equipment was fitted for use while overseas.

Following conversion, 5804 was allocated to Overseas Ambulance Train 34 where, as the sixth coach in the formation, it was numbered 3406. The complete formation was as follows:

The train was fitted out in July 1944 at the R.A.M.C. depot at Weston Camp, near Derby. The Pharmacy Car was equipped as a miniature hospital with a dressing / operating table and oxygen supply as well as the necessary surgical instruments, drugs and dressings.

The train left Southampton by sea on 2 October 1944, destined for Ostend in Belgium. A week later it was moved from there to its stabling point at Brussels (Petit Ile) by the 43rd British Ambulance Train Unit. 35 medical personnel were quartered on the train, and a Belgian baggage car was added to provide additional storage, forming a fifteen coach train in service.

Ambulance Train 34 saw almost continuous use in October and November 1944, collecting casualties from a railhead at Valkensward, near the Allied front line on the Dutch / German border. The casualties, both Allied and German, were taken to Brussels for treatment in General Hospitals there. At the end of November the train was moved to Amiens in France for the winter. Despite operational difficulties resulting from the freezing conditions, a few operational trips were made between Rouen, Lille and Ostend. March 1945 saw the train stabled at Lille, making several trips to railheads near the Dutch / German Border.

In April 1945 the train was stabled at Etterbeke depot, Brussels. The nature of its duties changed to the transfer of casualties from the Brussels General Hospitals to Convalescent Hospitals at Lille and Eekloo, and also to Ostend for repatriation by sea.

Ambulance Train 34 was disbanded by the British Army Train Unit at Ostend Quay station on 2 June 1945. It had made 28 operational trips, carrying more than 6,500 casualties. The train was then taken over by the USA Army Transportation Corps, probably for use in repatriating recovered Allied prisoners from Germany to the Channel Ports, before finally returning to England towards the end of 1946.[3]

5804 was converted back to a Corridor Brake Third at Swindon and re-entered regular service in February 1947. It ended service having been converted for use as a breakdown tool van, DepartmentalRolling stock used for the railway’s own functions (engineering etc.) rather than for general passenger or goods traffic. number ADW 150304.[1]

For some years it was located by the car park entrance; during this time the side visible to the public was painted as a war time Ambulance Car. In late March 2017 5804 was moved the other side of the car park, next to the Sales Coaches, revealing the other side in a GWRGreat Western Railway chocolate and cream livery with no insignia.