StanierWilliam Stanier, Chief Mechanical Engineer (CME) of the London, Midland and Scottish Railway 1932-1944 8Fs saw occasional use on Alveley Colliery coal trains during the last days of the Severn Valley Branch. Classmate 48531, then based at Wolverhampton's Oxley MPDMotive Power Depot, was photographed working a southbound coal train at Bewdley on 29 June 1966[1].

48773 was built by the North British Locomotive Co. in Glasgow as Works No 24607 of 1940. The locomotive was part of a War Department order for use in France, for which it was numbered WD 307. France fell to Germany before the locomotive could be exported, so it was loaned back to the LMSLondon Midland & Scottish Railway and numbered 8233.

Following the Soviet Union’s entry into the War, the locomotive was requisitioned and sent to Iran as Iranian State Railways No 41.109. There it worked on the Trans-Iranian Railway, hauling double-headed 700 ton trains of supplies intended for the Soviet Union up steep gradients in the searing desert heat. On 19 August 1942, the locomotive was famously derailed after colliding with a camel, and later in 1944 was converted to oil-burning.

In 1946 the locomotive was sent to the British Army's Middle East Forces (MEF) in Egypt where, numbered WD 70307, it worked in the Suez Canal zone. For a while the locomotive was loaned to Egyptian State Railways, but by 1948 was in need of a new firebox and scheduled to be scrapped.

Fortunately, the locomotive was not scrapped but repatriated to the UK and overhauled at Derby between 1952 and 1954. The locomotive then adopted yet another identity as WD 500 at the Longmoor Military Railway.

In 1957 the locomotive was bought by British Railways and at first was misallocated the number 90733 (now carried by another preserved locomotive), following the Austerity 2-8-0s series with which it had been confused, but quickly altered to 48773 at the end of the LMSLondon Midland & Scottish Railway 2-8-0s.[2] Although withdrawn twice for scrapping, 48773 survived each time, finally ending BRBritish Rail or British Railways service based at Rose Grove in July 1968 when it participated in the ‘grand finale of steam’ over the trans-Pennine route via Copy Pit summit. It also worked the LCGBLocomotive Club of Great Britain ‘Farewell to Steam’ on 4 August 1968. 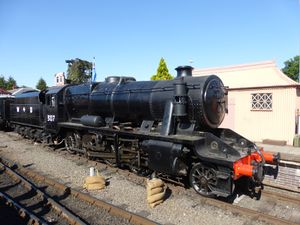 One of the main line excursions was in 1975 when 48773 travelled to Shildon to take part in the Rail 150 celebrations, piloting a short train which also included 43106 and three carriages. A full list of main line activities is as follows:

On 27 September 1986 a service took place at Highley in which 48773 was dedicated as a memorial to British military railway personnel who lost their lives on active service during the Second World War. The event was marked by a flypast of an Air Atlantique Douglas DC3 and the last working de Havilland Mosquito. The locomotive carries a plaque commemorating the dedication service.

In Summer 1992 48773 was hired out for a period to the Keighley & Worth Valley Railway, and the following year to the West Somerset Railway.

On 25 November 2000 it was involved in a collision with a vehicle on Northwood Crossing, fortunately with no fatalities involved.

That engine's last ticked [sic] started before the SVRSevern Valley RailwaySVRA:Severn Valley Railway AssociationSVRS:Severn Valley Railway Society installed the reverse osmosis water treatment, as a result both boiler and firebox need major work. All tyres are down to scrapping size. The right hand cylinder is broken, and although the welded repair has so far held up, a new cylinder is highly desirable. The tender tank is badly corroded and a replacement tank is needed, all these above all the normal work needed for an overhaul.[8]

On 20 June 2018 48773 was moved from the Engine House to storage in Kidderminster in readiness for an event to mark the 50th anniversary end of BRBritish Rail or British Railways steam in August 1968. The locomotive appeared in WD livery as WD 307, complete with mock air brake equipment, for the 2018 'Step Back to the 1940s' event which began on 30 June, before reverting to the BRBritish Rail or British Railways 48773 livery for the 'Last Days of Steam' event on 4 August 2018. She was again displayed at Kidderminster between 16-24 February 2019, offering further opportunities for footplate visits, before returning to the Engine House in March 2019.

As a locomotive with a unique military history, it was suggested that 48773 should be dedicated as a Memorial to those military railwaymen of the Corps of Royal Engineers (Transportation) who lost their lives in World War II. In 1986 a Service of Dedication was held at Highley led by the Dean of Hereford, and conducted with full Military Honours. In 2002 the Society compiled a Roll of Honour and Books of Remembrance commemorating 354 known casualties. The dedication was made by the Chief Royal Engineer, Lieutenant-General Sir Scott Grant KCB, at a Service held at Kidderminster. Since 2008 these have been on display the Engine House.

The names of a further 54 WWII casualties have been identified and an additional Roll of Honour was been produced by the Stanier 8F Locomotive Society. This was unveiled by Brigadier Mike Stephens at a ceremony at the Engine House on 1 October 2011, 25 years after the locomotive’s dedication, together with a Roll of Honour commemorating the Railway Sappers killed in an accident on the Longmoor Military Railway on 13 October 1956 involving sister locomotive WD512. Over 200 ex-servicemen, family members and visitors were present. Visitors can see the Rolls of Honour and information panels describing the history of the Railway Royal Engineers alongside the locomotive.[9]