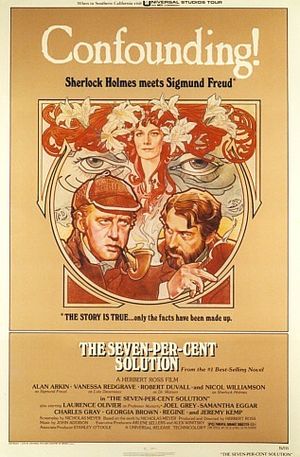 Filming of the railway scenes took place over more than 30 days in late 1975 and saw considerable involvement from the SVRSevern Valley Railway. ¾ of a mile of the old Stourport Branch was relaid for filming to take place, and stations were also extensively modified. Filming took place at almost every locality on the SVRSevern Valley Railway apart from Bridgnorth[1] (although Six Bells Junction reports Bridgnorth station had been renamed Tatabánya).[2]

LMS Ivatt Class 2 46443 and sister 46521 were repainted in Furness Railway red livery and had flared stovepipe chimneys and large brass domes added as a representation of Austrian Railways locomotives, a livery they carried for some months (the two locomotives were identically numbered as 60.116 but 46443 faced north and 46521 faced south to take advantage of the sun and lineside locations). LMS Stanier Class 5 45110 facing north and LMS Stanier 8F 48773 facing south were numbered 90.160 and similarly paired for filming, being of similar appearance (above the footplate level!).[3] A fifth loco, normally GWR Pannier 5764 or GWR Small Prairie 4566, was used to move the film company’s equipment around. The carriages were Pinewood-built bodies on bogie bolster underframes, the latter which included 3 Flat EDs having been specially purchased for the film by Universal Studios and later ‘donated’ to the SVRSevern Valley Railway.

The main railway scene featured the Pasha’s train, hauled by 90.160, being chased by a train commandeered by Holmes and hauled by 60.116. For part of the filming, the plot dictated that Holmes’ locomotive should run short of coal, requiring the moguls to run with an empty tender and coal stored in sacks on the footplate. A border crossing checkpoint was constructed on Victoria Bridge for one scene.[3]

45110 was bought from its previous owners by SVRSevern Valley Railway(H) at this time; the purchase contract included a clause that it was conditional on the filming contract being signed.[1]

Sherlock Holmes returned for filming at the SVRSevern Valley Railway in 2019 in Enola Holmes.

During filming a Special Train operated for the Mid Hants Railway Preservation Society / 48518 Group on 11 October 1975, with LMR 600 Gordon hauling with SVRSevern Valley Railway leg between Bewdley and Bridgnorth and return. The SVRSevern Valley Railway was closed to the public as filming was taking place, and trains for the filming had priority resulting in the Special being delayed at several stations.[2]