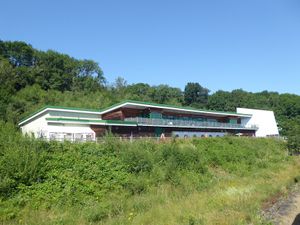 View of The Engine House from Highley Station (Wikimedia Commons)

The Engine House at Highley opened in 2008 and is the SVRSevern Valley Railway's main museum, Visitor and Education Centre. It is situated approximately 200 yards from Highley Station on the site of the former sidings of Highley Colliery. The other major museum on the railway, Kidderminster Railway Museum, is run by an independent charitable organisation.

Entry to the Engine House is usually free with possession of a valid ‘Freedom of the line’ ticket or Loyalty Pass; otherwise an admission fee is payable.

The Engine House is also home to the SVR Archives.

Before the opening of the Engine House, BR 80300 Post Office Sorting Van was located at Highley and used as the visitor centre. The Engine House was originally conceived as a simple storage building to house "out-of-ticket" engines under cover in order to reduce the damage done by the weather. However for various reasons, including attracting external funding, the project morphed into the visitor museum and education centre that stands today, whilst still achieving the original aim of storing locomotives. Funding received towards its construction included £3,363k from the Heritage Lottery Fund, £948k from the European Union Regional Development Fund and £200k from Advantage West Midlands.[1]

The "modern" architectural design of the building has attracted polarised comments. Prior to construction, the SVRSevern Valley Railway noted that The Engine House will be of modern design, and will use modern materials in its construction. The reasons for this decision are many, but cost was a particular factor as was the stability of the ground on the Landsale Yard site. Geological factors and old mine and quarry workings are all factors here. The ground, the Engineers tell us, is 'challenging' to say the least.[1]

The main contractor for construction was George Law & Co. Ltd[2], the company who also built Bridgnorth Cliff Railway in the 1890s.[3] Construction of The Engine House began in 2006. The hillside behind the building was graded and stabilised using soil nailing, parts of the old mine workings underneath were grouted, and a large retaining wall was built. More soil nailing was carried out in front of the building to ensure no lateral pressure would be placed on the railway embankment. For the building itself, some 120 piles up to 15 metres deep were sunk and tied together by beams cast in reinforced concrete.[3]

The Engine House was scheduled to open in the summer of 2007. However Highley was one of the locations which suffered significant damage in the freak storms in June and July of that year. As a result, opening to the public was delayed until Good Friday, 21 March 2008; the day which also saw the resumption of services over the full length of the line.

An opening ceremony was held on 28 April 2009 with visiting BRBritish Rail or British Railways RiddlesRobert Arthur "Robin" Riddles, Member of the Railway Executive for Mechanical and Electrical Engineering responsible for the design of the British Rail Standard Class locomotives Standard 8PThe British Railways system of classifying steam locomotives by power using a number from 0, least powerful, to 9, most powerful, followed by either F for freight, P for Passenger or MT for Mixed Traffic. class PacificLocomotive with a 4-6-2 wheel configuration 71000 'Duke of Gloucester' hauling a special train from Kidderminster, carrying guests for the ceremony.[4] However the SVRSevern Valley Railway’s patron H.R.H. The Duke of Gloucester was unable to attend due to illness, so The Lord Lieutenant of Shropshire carried out the official duties in his place. The Duke finally visited the Engine House on 21 October 2009, when he also carried out the opening ceremony for the new Highley footbridge.

There were over 120,000 visitors to the Engine House during the first 2 years of opening[5]. Since that time it has hosted numerous special events. On 17 September 2015 H.R.H. The Duke of Gloucester made another visit as part of the SVRSevern Valley Railway's Fiftieth Anniversary celebrations.

On 26 February 2016 the The Trustees of the National Heritage Memorial Fund (HLFHeritage Lottery Fund (National Lottery Heritage Fund from 2019)) took a legal charge code 0104 6274 0017 over the Engine House.[6]

As of 2022[update], steam locomotives on display while awaiting overhaul are:

Carriages and goods wagons on display include:

Other rolling stock formerly on display

Locomotive LMS Stanier 8F 48773 is dedicated as a Memorial to those military railwaymen of the Corps of Royal Engineers (Transportation) who lost their lives in World War II. In 2002 the Stanier 8F Locomotive Society compiled a Roll of Honour and Books of Remembrance commemorating known casualties. Since 2008 it has been on display with the Roll of Honour at the Engine House and an additional Roll of Honour was unveiled by Brigadier Mike Stephens at a ceremony at the Engine House in 2011, together with a Roll of Honour commemorating the six Railway Sappers killed in an accident on the Longmoor Military Railway in 1956. Over 200 ex-servicemen, family members and visitors were present. Visitors can see the Rolls of Honour and information panels describing the history of the Railway Royal Engineers alongside the locomotive.[8].

A donation was unveiled in August 2019 by the Charitable Trust acknowledging contributions to the "Helping hands for Falling Sands" appeal in aid of the restoration of Falling Sands Viaduct. The Trust's appeal had secured £397,000 in donations from individuals, community organisations, businesses, trusts and foundations[9].

As of 2022[update] current exhibitions are:

A small area on the ground floor recreates the interior of the Cooper's Arms where the Severn Valley Railway Society was formed in 1965. A short video gives a history of that era. There are numerous other exhibits, video features and interactive items. 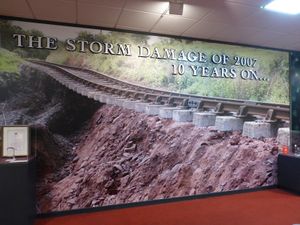 The Engine House is licensed for civil marriage and civil partnership ceremonies which can be conducted in a variety of railway themed locations.

Other events held at The Engine House include:

The Manchester Model Tramway Group operates a 1949-built fully-operating miniature tramway layout. It was the brainchild of George Oakley, who had a keen interest in both the Manchester and Llandudno & Colwyn Bay tramway systems.

It has been displayed at The Engine House most years since at least 2014, either in the February half-term service or Open House Weekend[11].

Until 2012 ‘Buffers’ restaurant offered a table service. In 2012 a refurbishment took place with the creation of a self-service 'The Flag & Whistle Food Stop'.[12]. In addition there is a gift shop and an outdoor children's play area. The restaurant balcony and outdoor picnic areas overlook the line and give good views of trains leaving and arriving at Highley. As of 2021[update] the buffet has been moved to the ground floor in the former gift shop area.

In October 2017 the Charitable Trust announced it was establishing an In Memory Garden for SVRSevern Valley Railway supporters, close to the Engine House. The area is directly beneath the gallery, on level ground below the retaining slope. Its design has been generously donated by Arup’s landscape architecture team. It will also feature an indoor commemorative area on the balcony inside The Engine House. This will be a screened-off area, with scrolls of honour and a memory book.[13] Initial work involved fencing off the area and creating a set of access steps, before landscaping and designing the garden layout and planting scheme.[14]. By July 2018 vegetation clearance was underway.

In 2018 the Postcode Lottery awarded a grant for the construction of a shelter to enhance the facilities for children to learn about air raids and experience.

The Engine House on www.svr.co.uk