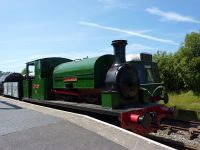 Stewarts and Lloyds numbered her No. 47. A number of locomotives carried the (anglicised) names of Welsh towns in tribute to the Welsh wife of the owner of the company. 47's working life was spent at Corby, hauling iron ore from local quarries to the iron works.

During the oil crisis in 1973, 'Carnarvon' was reportedly used to shunt wagons of cider apples for Bulmers (a producer of cider), in place of the usual diesel shunters [2]. When the Centre closed, she found a new home in 1993 at the South Devon Railway.