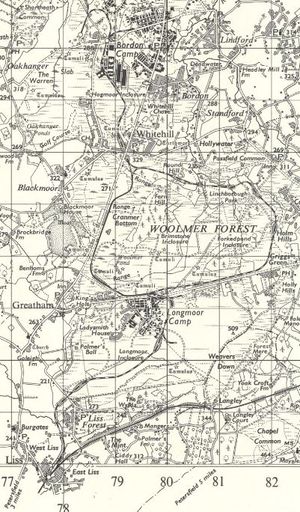 In 1933 an extension was opened to a new southern terminus at Liss, with a platform adjacent to those serving the Portsmouth Direct Line. In 1942 an additional loop running eastwards from Longmoor camp was completed which enabled circular running and allowed for improved training without the need to turn trains at the terminals.

A Roll of Honour is displayed in The Engine House commemorating the military railwaymen of the Corps of Royal Engineers (Transportation) who lost their lives in World War II and since. It includes six sappers who were killed in an accident involving a head-on collision in foggy weather on the LMR on 13 October 1956.[1]

Being a training railway, the layout would regularly change as track was constructed and deconstructed. At its peak the railway ran to over 70 miles of operational track and sidings. In its latter years it staged a number of open days and hosted incoming railtours, before operations ceased on 31 October 1969.[2][3]

The Children's Film Foundation film "Runaway Railway" was filmed at the Longmoor Military Railway in 1965.[4]

The SVRSevern Valley Railway has been home to a number of items of rolling stock which were formerly associated with the LMR. This category page provides links to relevant pages.

The following 6 pages are in this category, out of 6 total.