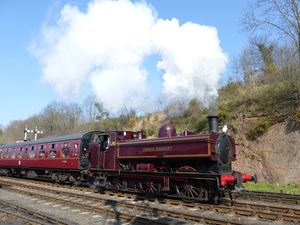 5786 is a GWRGreat Western Railway CollettCharles Benjamin Collett, Chief Mechanical Engineer (CME) of the Great Western Railway 1922-1941 5700 class 0-6-0PT ‘pannier tank’ of which there are two examples resident on the SVRSevern Valley Railway. A brief description of the 5700 Class is included in GWR Pannier 5764 (the other resident being 7714).

5786, ex-London Transport L92, is a former SVRSevern Valley Railway resident. It began life with the GWRGreat Western Railway and later BRBritish Rail or British Railways(W), before (like 5764) being transferred to London Transport in 1958.

In 1958 it was overhauled at Swindon and transferred to London Transport where it was painted maroon and numbered L92. It operated from from Lille Bridge and Neasden depots, shunting and working maintenance trains and goods traffic.[2]

In 1969 the locomotive was purchased in working order by the Worcester Locomotive Society and moved to the SVRSevern Valley Railway, where it was steamed and restored to GWRGreat Western Railway livery. In May 1970 it travelled in steam to the Birmingham Railway Museum at Tyseley for a festival of transport. It subsequently returned to the SVRSevern Valley Railway, but a dispute between the owners and Railway meant it did not work further on the line.

Shortly thereafter the Society moved their locomotives to the Bulmer's Railway Centre at Hereford. When the Centre closed closed in 1993, 5786 moved to the South Devon Railway. It moved to the Gwili Railway in 2020.

5786 returned to the SVRSevern Valley Railway for two Gala visits, in spring 2010 (in BRBritish Rail or British Railways livery) and spring 2015 (in London Transport livery as L92).