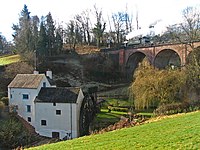 Oldbury Viaduct and Daniel’s Mill from the East (Geograph)

Oldbury Viaduct (Bridge 33) is situated a short way south of Bridgnorth. The viaduct is built of red brick with a sandstone parapet, and has five arches with at 33ft span. It carries the SVRSevern Valley Railway over a small valley where a stream runs past Daniel's Mill. After closure of the section of line, BRBritish Rail or British Railways engineers intended to demolish the structure but were refused permission by the mill owner, a supporter of the railway.


The line immediately south of the viaduct was one of the many areas damaged in the 2007 storms. The Viaduct briefly featured in The Seven-Per-Cent Solution and The Chronicles Of Narnia films[3][4].