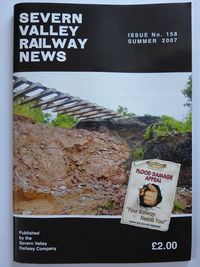 A freak thunderstorm hit the Severn Valley Railway on the evening of Tuesday 19 June 2007, causing massive damage to the Railway’s infrastructure. Embankments collapsed, cuttings were filled with debris, and much other destruction took place.

An inspection of the line on 20 June confirmed that only the section between Bewdley and Kidderminster was relatively unaffected and could remain open for passenger traffic. By 21 June the full implications for the Railway were understood and development of a recovery plan was under way. This would involve properly considered engineering solutions, not only to resolve the problems but hopefully to prevent them recurring.

Even as the recovery efforts began, the wet weather continued, culminating in another thunderstorm on 20 July 2007 which caused further damage towards the South end of the line. In total the line was breached in 45 separate locations between Bridgnorth and Northwood Halt.

Some of the worst affected places on the line and the repair work involved were as follows (from north to south):

An idea of the amount of work involved can be gained from the following statistics:

Water draining from the surrounding land towards the River Severn normally flows under the railway through culverts. Many of these became blocked by debris brought down by the storms, contributing to the number of washouts that damaged the line. Prior to the storms, the SVRSevern Valley Railway possessed plans identifying 28 culverts under the railway. Subsequently, a detailed survey carried out to identify any unrecorded culverts increased this number to 108.[2] All the culverts were examined and upgraded or replaced where necessary. All workers entering enclosed spaces need to hold the relevant confined spaces certification and rescue winches, gas monitors, breathing equipment etc. need to be available. In view of this the SVRSevern Valley Railway put the inspection duties out to specialist contractors.[3] All are now numbered, their precise location and GPS coordinates recorded, and all are checked on a regular basis.

The section of the line between Bridgnorth and Hampton Loade reopened for passenger services on Saturday 9 February 2008 to coincide with the half-term holiday. Electro-diesel E6006 was the first locomotive to work the entire line between Bridgnorth and Bewdley on 10 March 2008, hauling an engineers’ train with permanent way materials and also bringing Jinty 47373 to the southern end of the line to be turned ahead of its planned move into The Engine House later in the year. A special reopening train hauled by newly-overhauled 7812 Erlestoke Manor worked a return trip between Kidderminster and Bridgnorth on 20 March, with passenger services restarting on the following day.[4]

The SVRSevern Valley Railway's success in recovering from the storm damage was marked by a number of awards, including the Transport Trust's 'Preservationist of the Year', the Ian Allen Publishing 'Heritage Railway of the Year' and the Heart of England Tourist Board 'Best Tourism Experience of the Year'.

A Royal visit to the SVRSevern Valley Railway took place in June 2008. SVRSevern Valley Railway News stated "The popular misconception was that the reason for the visit was especially for Their Royal Highnesses The Prince of Wales and the Duchess of Cornwall to view the most major repairs to the storm damage on our line. This was not the only reason; His Royal Highness had requested a visit to a heritage tourist line with the Royal Train, steam-hauled. And that is what happened."[5]

All pictures from Wikimedia Commons