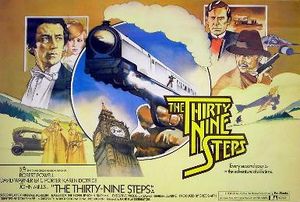 During the film Hannay flees to Scotland on a train, but is forced to make a daredevil escape on a bridge after police board the train. The railway action scenes were filmed on the SVRSevern Valley Railway.

The railway sequence, set in early 1914, begins in the ticket office at London St Pancras Station. The action scenes used LMS Ivatt Class 2 46443 (in MRMidland Railway livery as No 644) and five of the SVRSevern Valley Railway's LMSLondon Midland & Scottish Railway carriages with 'Midland' stickers applied. The scenes filmed on the SVRSevern Valley Railway, which last around 5 minutes in total, comprise:

A spin-off television series Hannay, also featuring Robert Powell, included scenes filmed on the SVRSevern Valley Railway during 1987. It ran for 13 episodes from 1988 to 1989.