From SVR Wiki
(Redirected from 7819)
Jump to: navigation, search 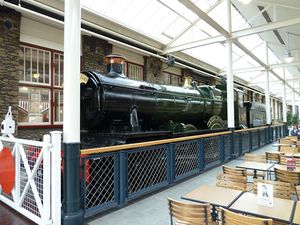 7819 Hinton Manor is one of three GWRGreat Western Railway CollettCharles Benjamin Collett, Chief Mechanical Engineer (CME) of the Great Western Railway 1922-1941 7800 Manor class 4-6-0 mixed traffic locomotives based at the SVRSevern Valley Railway, the others being 7802 Bradley Manor and 7812 Erlestoke Manor.

The Manor Class was designed as a lighter version of the GWRGreat Western Railway Grange Class, giving a wider Route Availability. They were one of the classes of locomotives used on the Severn Valley Branch in commercial service, although mainly for freight as by the time they were introduced, passenger services mostly used tank engines and diesel railcars. Hinton Manor was the last of the first batch of 20 Manors which were built between 1938 and 1939 and incorporated parts from old GWRGreat Western Railway 4300 Class moguls. BRBritish Rail or British Railways built a further 10 in 1950 and rated the class 5MTThe British Railways system of classifying steam locomotives by power using a number from 0, least powerful, to 9, most powerful, followed by either F for freight, P for Passenger or MT for Mixed Traffic..

In March 1963 7819 moved to Machynlleth. The following month 7819 took part in a Ffestiniog Railway Society rail tour on 20-21 April, working sections between Ruabon, Minffordd and Shrewsbury.[1] 7819 regularly headed the ‘Cambrian Coast Express’ from Shrewsbury and on 10 August 1963 double-headed the Royal Train with 7822 for HM The Queen's visit to Pwllheli.

A small team led by Ray Tranter carried out the restoration at Bewdley. After lifting from the frames, the boiler had three quarters of the tubes replaced and two firebox stays changed, while the smokebox fittings were renovated, including repairs to the blower ring, regulator box and superheater header. The frames were jacked up to release the driving-wheels and bogie. One axlebox required re-metalling and re-profiling. The bogie was completely stripped down and repairs to one axlebox carried out. The boiler and frames were reunited on 3rd May 1976.[2].

In spring 1977 a raffle organised by the SVRA Wolverhampton Branch was held to raise funds to buy fittings and restore the tender.[3]. The first steam test, a return trip to Bridgnorth in June 1977, revealed that the valve chests were not parallel. Both valve chests were re-bored with equipment borrowed from the Dart Valley Railway and the Standard Gauge Steam Trust. After a further steam test on 7 September 1977 acting as pilot to 47383 on a service train, restoration was completed (albeit with cab fittings borrowed from 1501 and the tender from 3205 when Hinton Manor made her debut in traffic at the Autumn enthusiasts' weekend.

7819 took part in the filming of the "Fire on the Line", the third part of the God's Wonderful Railway trilogy first broadcast in March 1980.

Over the winter of 1979-80 the restoration of Hinton Manor's own tender and cab fittings was completed. The locomotive was also repainted in HawksworthFrederick Hawksworth, Chief Mechanical Engineer (CME) of the Great Western Railway 1941-1948 style GWRGreat Western Railway green lined livery at the request of the organisers of an international steam festival at Dusseldorf (subsequently cancelled).[5] Service continued through 1980, but in June 1981 7819 burst a small boiler tube. Examination revealed other burst and weak tubes, surprisingly mostly those replaced during restoration and not the remaining ex-BRBritish Rail or British Railways ones. Hinton Manor was withdrawn from traffic and joined the queue of locomotives awaiting major overhaul.

By spring 1984 it had been decided that Hinton Manor would take part in the following year's GWRGreat Western Railway 150 celebrations, starting with an excursion double-headed with 6000 King George V from Bristol to Plymouth on Easter Sunday 7 April and the return leg on the Bank Holiday Monday. The overhaul now had a tight timetable and was once again led by Ray Tranter. Dismantling began in earnest, with the boiler lift taking place on 27 August. The boiler was completely re-tubed, and all the side stays and two crown stays in the firebox renewed. Other firebox repairs included some copper inserts and attention to the throat plate. In the meantime the frames were stripped down to component parts. All the axle boxes received new crown bushes and were metalled and machined. The motion and brake gear were completely overhauled. New valves were fitted and new pistons after the cylinders had been re-bored. On 23 February 1985 the boiler was lifted back onto the frames. The successful steam test took place on 8 March with Hinton Manor piloting 6960 Raveningham Hall. The overhaul had broken two records for the Railway, the fastest overhaul ever carried out (taking only nine months) and the quickest steaming of an overhauled locomotive after the boiler was replaced in the frames (twelve days).[2] It was during this overhaul that 7819 was christened "Trant's Babby" by the MPDMotive Power Depot staff, because of the care and attention that he lavished upon her.[6]

After final painting (in BRBritish Rail or British Railways black lined livery, with early crest and red backed name and number plates) and test running, Hinton Manor left Bridgnorth for Hereford on Saturday 6 April 1985 to join up with the King and continue to Bristol. On the way there a hot box was found on the tender, so on arrival at Hereford a call was made and a tender axle box bearing was removed from 3205 (not in traffic at that time) and rushed to Hereford by road. Attempts to remove the faulty bearing ran out of time so the replacement bearing and tools were thrown in the support coach. Both locomotives then continued to Bristol for the overnight stop, where the troublesome box now appeared to be running satisfactorily. During the following day's run from Bristol to Plymouth the King suffered a similar hot box and was failed at Taunton. 7819 continued over the Devon banks banked by two class 37s but suffered another hot tender axle box and was failed in turn at Exeter. While there, the announcement was made that 4930 Hagley Hall was being dispatched from the SVRSevern Valley Railway to travel overnight to Plymouth to provide some steam haulage on the return leg. Ray Tranter and others then decided to try to install the spare bearing in the yard at Exeter so Hinton Manor could also participate. The job was completed with the aid of hydraulic jacks brought up from Plymouth, allowing Hinton Manor and support coach 6913 to leave for Plymouth late on Sunday night where they were joined by Hagley Hall at around 4:00am. On the Bank Holiday Monday return, the SVRSevern Valley Railway locos successfully climbed the South Devon Banks with their 485 ton train and reached Bristol nine minutes ahead of time.[6]

After restoration in 1979, 7819 was a prolific performer in the years that followed both on the SVRSevern Valley Railway and the main line. The latter included the GW150 celebrations in 1985, when 7819 travelled to Plymouth, Swindon, Avonmouth and Newport, and also the 1987 Cambrian Cardigan Bay Express special service steam services between Machynlleth and Pwllheli where 7819 became the first steam locomotive in more than 20 years to haul a passenger service on this section of the Cambrian Coast Line. A full list of main line appearances is given below.

In 1990 7819 conveyed HRH The Duke of Gloucester from Kidderminster to Bridgnorth for the official opening of the railway's boiler repair shop. The Duke drove 7819 for part of the journey. The locomotive also made the first operational entry into platform 2 at Kidderminster when it was brought into use on 25 November of that year.[7]

Following a loan to the Nene Valley Railway in 1994, 7819 was placed in storage awaiting major repairs on 7 January 1995. After a period in store in the open the locomotive was cosmetically restored and placed on static display in the McArthurGlen shopping complex, Swindon. It returned to the SVRSevern Valley Railway on 21 August 2018 and moved to static display at The Engine House in March 2019.[8] The 'footplate' is accessible to allow visitors to climb aboard and learn how to operate a steam locomotive, and for weddings and civil ceremonies.

A new set of tyres is in storage, in readiness for the restoration.[10]

The 'Friends of Hinton Manor' launched an appeal on 20 September 2008 to raise money for 7819's overhaul.

The Charitable Trust operates a restricted fund for the purpose of returning the locomotive to service, for which it appealed for funds. As of 30 June 2020[update] the restricted funds totalled £19,330.[13] The appeal no longer features on the website list of active appeals.