A number of the class including 3205 were used on the Severn Valley Branch from the mid 1950s onward, mostly operating from Shrewsbury although No. 2207 was housed at Kidderminster Shed. As well as freight duties, they worked occasional summer Sunday passenger trains[2].

3205 was built at Swindon and entered service in October 1946 allocated to Gloucester Horton Road, although spending most of her time at its sub-shed at Cheltenham. In June 1955 the locomotive spent 3 months at Worcester before returning to Gloucester, with a permanent move to Worcester taking place in October 1956. In August 1960 3205 moved to Shrewsbury; being recorded on a passenger service on the Branch in 1961.[2] Three months in summer 1961 were spent at Machynlleth before returning to Shrewsbury’s sub-shed at Craven Arms.

By 1963 3205 was spending most of her time in storage out of use, initially at Hereford and later at Exmouth Junction. She was steamed again in March 1965 to work "The Exmoor Ranger" railtour, and in May 1965 moved to the S&D Templecome shed for a final few weeks. She was withdrawn from service in June 1965, but had one final duty on 2 October 1965, working the leg of the Ian Allen "Pendennis Castle Special railtour" from Exeter to Totnes with another GWRGreat Western Railway locomotive, 4555, as a positioning move to deliver the locomotives and four BRBritish Rail or British Railways(W) auto trailers into preservation [3][4].

When 3205 was withdrawn from service in 1965, she was bought for preservation by the 2251 Fund based at the newly-formed Dart Valley Railway (now the South Devon Railway).[5] After arrival on 2 October 1965, the fire was dropped and the locomotive remained out use, although receiving close attention from its owners.[4] The first passenger trains would not run on the Dart Valley Railway until April 1969[6].

In 1967 3205 became the first locomotive on the fledgling SVRSevern Valley Railway. She was hauled dead with motion disconnected from Totnes to Stourbridge on 22nd February 1967,[7] and travelled onwards to Bridgnorth under her own steam on 25th March accompanied by 4 coaches including GWR 6562 which is still at the SVRSevern Valley Railway. The locomotive was steamed on a number of "Gala" occasions between then and the official opening day in May 1970; the absence of a Light Railway Order meaning the public would purchase a ‘Day Membership’ which allowed them to travel for free!

On 27 September 1969, 46443 and 3205 together with a number of other items of SVRSevern Valley Railway rolling stock were piloted by a BRBritish Rail or British Railways Class 47 from Bewdley to Tyseley to take part in an open day there, where 3205 won the award for the best restored visiting locomotive.[9] 3205 had both originally arrived on the SVRSevern Valley Railway facing south and returned facing in the same direction.

On opening day, 23 May 1970, 3205 hauled the first service train from Bridgnorth. By early December 1970 the locomotive had recorded 900 miles in traffic before suffering a "...spectacular tube failure", requiring a partial re-tube to be carried out in early 1971. This was completed just before Easter, but the first day of operation saw issues with both big ends and the locomotive was withdrawn again for several months while the big ends were re-metalled and re-fitted.[10]. As a result only 80 miles in traffic were recorded in 1971.

In spring 1972 SVRSevern Valley Railway News noted that 3205 had been "bedevilled by minor ills, notably piston packing troubles and steam and lubricator pipe leaks, following complete re-tubing".[11] On Sunday 21 May, 3205 and newly restored 5764 were in service together, the first occasion on which two GWRGreat Western Railway locomotives had shared Severn Valley passenger services since the 1960s.[12].

In early 1973 3205 spent several months out of traffic while a new ashpan was fitted, with other repairs being required later that year,[13] by which time a foundation ring rivet had failed in the back corner of the firebox.[14] At the end of the year 3205 had recorded 2,426 miles in service since arrival in 1967[15].

After spending early 1974 as standby locomotive but without being used, the return to traffic of 46443 allowed a major overhaul to begin. It was initially thought that this would mainly involve heavy boiler repairs together with re-metalling the motion and a tender overhaul and would take "most of the year".[16] The tender work included reconstructing the badly wasted sub-frames and fitting a new bottom to the tank and coal space.[17] By September 1975 the boiler has been almost completely re-stayed and a successful hydraulic test carried out, while the estimated completion date had moved to 1977.[18]

When the valves and pistons were removed in early 1976, a visitor who had formerly worked at Tyseley Depot remarked "They've had their chips, valve faces worn out".[14] Remedying this required removal and splitting of the two halves of the cylinder block to fit new iron faces on which the slide valve operate. At that time the casting of replacement cylinders was considered all but impossible. It is thought that this repair may have been the first time in standard gauge preservation that a cylinder block was split. Nowadays, of course, the fitting of replacement cylinders is becoming the norm. The cylinders had been split by autumn 1976[19] and work had begun on the new valve face castings by the following spring.[20] Work continued slowly and carefully, and by the end of 1977 the cylinders had been bolted back together, placed in the frames, re-aligned and fitted bolts put in place. Work on the axle boxes had also been completed allowing the locomotive to be re-wheeled on 31 December 1977 using the newly-acquired 30 ton steam crane.[21]

Re-assembly continued the following year and by autumn 1978 the mechanical side of 3205's overhaul was complete, but a decision had been made to re-tube the boiler, the thinness of the flue tubes when removed underlining the wisdom of this.[22] A third hydraulic test during the extensive refit was passed in late August 1979 and the boiler reunited with the frames for the first time for 5 years (SVRSevern Valley Railway News commented that by this time, a test of one's SVRSevern Valley Railway seniority could be based on whether or not you could remember 3205 in its complete state!).[23] The marathon overhaul was finally completed in late 1979, with the locomotive recording just 2 miles in service. 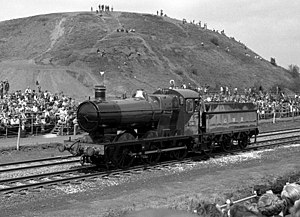 3205’s second period of SVRSevern Valley Railway service ended at the end of 1984 with firebox issues, the boiler inspector prescribing "flange rivets out!"[25] By that time the locomotive had recorded a total of 10,541 miles in traffic. A planned static appearance at the GWRGreat Western Railway 150 exhibition at Swindon in 1985 fell through when the event was cancelled and although generally mechanically sound, the locomotive was stored awaiting removal of the boiler for repair. In late 1986 it was announced that the owner had decided that 3205 would be leaving[26] and 3205 left the SVRSevern Valley Railway in March 1987, initially to the West Somerset Railway before returning to the South Devon Railway in 1998.