From SVR Wiki
(Redirected from 82045)
Jump to: navigation, search

Most of the ‘BRBritish Rail or British Railways Standards’ were essentially a development of the similar LMSLondon Midland & Scottish Railway type. However while the 3MTThe British Railways system of classifying steam locomotives by power using a number from 0, least powerful, to 9, most powerful, followed by either F for freight, P for Passenger or MT for Mixed Traffic. 2‑6‑2T chassis design was closely based on the LMS Ivatt Class 4, the boiler design was derived from the GWRGreat Western Railway No. 2 boiler as fitted to the GWR Large Prairie 2-6-2T.[1]

A further 18 of the class were to have been built, but the order for these was cancelled as part of BRBritish Rail or British Railways’s Modernisation Plan. The closure of branch lines such as the Severn Valley and the replacement of steam by DMUDiesel Multiple Unit services ultimately led to the withdrawal from service of those already built. None survived into preservation. 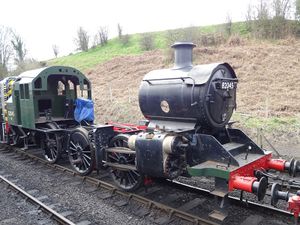 82045 at Bridgnorth, March 2019
The locomotive is being constructed at Bridgnorth Loco Works. It has been given the number 82045, which would have been allocated to the next class member had the Modernisation Plan not intervened. 82045's frame plates arrived at the SVRSevern Valley Railway in 23 April 2007.

Progress on construction at March 2019 can be seen in the picture (right). The Trust issues news updates on its website with progress reports. After over a decade of working in the open, 82045 was moved into the Works on 23 January 2019.

The SVRSevern Valley Railway want 82045 in service as soon as possible, and the Trust decided to put more work out to contract. In July 2022 it reached an in-principle agreement with SVR Engineering (ESMP) to contract some work to the Railway, using ESMPEngineering Services, Motive Power.’s resources to add to the Trust’s volunteering efforts.[3]

The boiler and firebox are being assembled at boiler shop.[4] Earlier, the project was one of those that suffered in 2011 from the theft of copper sheets that had been cut to size for the firebox.

On 17 April 2018, 82045 became a rolling chassis when the locomotive was wheeled at Bridgnorth.

On 23 October 2021 the SVRSevern Valley Railway released a video on its YouTube channel, 'Resurrecting a lost class with 82045' in which the Trust hoped for a completion date of 'later in 2023'.

The Trust has also sourced some common components with the Bluebell Railway Standard Class 2 Project which is building BRBritish Rail or British Railways Class 2MTThe British Railways system of classifying steam locomotives by power using a number from 0, least powerful, to 9, most powerful, followed by either F for freight, P for Passenger or MT for Mixed Traffic. 2-6-2 Tank Locomotive No 84030.

In 2011 the project was the beneficiary of SVRASevern Valley Railway Association's 'Cylinders for 82045' raffle. Including donations the gross income was over £21.000 with a net surplus of around £17,000.[6] In 2016 it was the Guarantee Company's "Slidebars and Crossheads" raffle which, in combination with an appeal to shareholders and further boosted by cash donations, generated over £30,000 for 82045.[7]

The Trust’s website notes that "As 82045 was destined for the WR had it been built as planned in 1956, it was decided that the loco when finished should appear in the attractive Swindon-inspired livery of dark green, lined out in orange and black. A subsequent repaint into lined black hasn't been ruled out, though."

In 2018 the Trust produced a limited number of models of 82045. By May 2019 only two models remained on display at Bridgnorth Station Shop.