From SVR Wiki
(Redirected from The Flying Pig)
Jump to: navigation, search 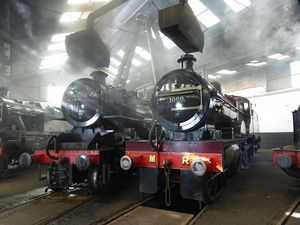 43106 was the last of a batch of 37 built by BRBritish Rail or British Railways at the former LNERLondon & North Eastern Railway Darlington North Road Works. The locomotive entered service at South Lynn, Norfolk in April 1951 where it remained for 5 years. Along with many others of the type it was extensively used on stopping passenger and freight services and occasional express passenger trains (the "Leicesters") on the Midland & Great Northern Joint Railway. Much of this system was single track with passing loops and the locomotive carried Whitaker token exchange apparatus fitted into a "pocket" towards the front of the tender. The sphere of operation included Peterborough, Leicester, Melton Mowbray, Spalding, Cromer (Beach), Yarmouth (Beach), and Norwich City.[1]

Following the closure of the former M&GNJR, 43106 was transferred to Woodford Halse on the former Great Central Railway in July 1956. There the locomotive was mostly used on freight workings to Banbury and also on the Stratford and Midland Joint line, usually to Stratford Old Town or Gloucester. In March 1962 Woodford Halse came under London Midland control and 43106 began a series of short stints at Saltley, Wellingborough, Kettering and Trafford Park before a move to Heaton Mersey shed in September 1963. There it worked trip freights in the Stockport district and passenger trains between Manchester Central to Cheadle Heath, before being stored in serviceable condition for around 9 months.[1]

In August 1966 43106 moved to Carlisle Kingsmoor Depot.[1] During 1967 43106 became one of a number of locomotives cleaned by the "Master Neverers Association" on the occasion of a Langholm / Alston railtour.[2] The locomotive made several trips into Scotland including the most northerly on 25 February 1967, a railtour from Carlisle to Beattock and back during which the 43106 became the last steam locomotive to use Beattock turntable. The locomotive was also used regularly as Carlisle station pilot during 1967.[1] She was allocated to her final shed, Lostock Hall, in September 1967.[3] After suffering a minor derailment at Colne in April 1968, BRBritish Rail or British Railways considered damage to her intermediate drawgear to be too serious for economic repair and the locomotive was stored for two months until being officially withdrawn from service on 23 June 1968[1] after a relatively short working life of 17 years 2 months[3].

43106 was one of the SVRSevern Valley Railway’s early locomotives, arriving ‘light engine’ direct from Lostock Hall on 2 August 1968.[4] It worked services on the official opening day in May 1970, and in 1975 took part in the Rail 150 celebrations at Shildon, travelling there in steam behind 8233. It saw regular use until being taken out of traffic in July 1976 for the cross-heads to be re-metalled. The loco soon returned to duty but began to see declining amounts of use as the axle boxes and motion were showing signs of wear. During the following winter, new piston and valve rings were fitted and some firebox repairs were carried out, including the fitting of new studs. 43106 returned to traffic in late July 1977, but in March 1978 was withdrawn from traffic with leaking superheater flue tubes. [5]

In spring 1979 the SVRSevern Valley Railway accepted an invitation for 43106 and other SVRSevern Valley Railway locos to attend the 1980 Rocket 150 celebrations at Rainhill. A major overhaul followed, with the locomotive first being steamed on 1 May 1980. On 19 May 43106 left for Rainhill, still in black undercoat, with final painting into plain BRBritish Rail or British Railways black livery being completed after arrival at Rainhill.[5] A number of other solo and double-headed appearances during the early 1980s followed.

43106 was used in filming the 1987 children's TV series Knights of God. In that year it was nominated ‘spare engine’[6] and saw relatively light use, before being withdrawn as requiring a boiler overhaul in spring 1988.[7]

The locomotive then spent some time stored out of use stored at Highley,[8] before moving to Bridgnorth in late 1998 for the long awaited overhaul to begin.[9]. This proceeded much slower than the previous overhaul, with the boiler not being lifted until 15 January 2000. 2001 saw the locomotive moved into the loco shed where work continued.[10] In 2003 an SVRA raffle raised £9,224 towards the overhaul.[11] The overhaul was finally completed in autumn 2009, with the locomotive returning to traffic in time for the Autumn Gala. Less than a week after returning to service, 43106 was derailed at Hampton Loade station on 28 September 2009, suffering damage to the tender and its wheelsets. A new axle was ordered from South Africa, but to expedite her return the Strathspey Railway kindly loaned the axles from the tender of 46512 which was not in service at the time.[12]

A more recent intermediate overhaul (January to July 2013) saw work carried out on the boiler which allowed a new 10 year certificate to be issued along with a completely new loco dragbox. She returned to service on 26 August 2013.

Since returning to service, 43106 has been a regular on the SVRSevern Valley Railway as well as appearing at gala events on other heritage railways. In September 2015, 43106 appeared at the LMSLondon Midland & Scottish Railway themed gala at Barrow Hill, becoming the first of her class to appear at the Roundhouse in half a century. At the end of 2019, 43106 had recorded a total of 123,553 miles in preservation on the SVRSevern Valley Railway. The reported total may include mileage on the main line and on hire to other railways.[13] The locomotive is owned by the Ivatt Class 4 Group.