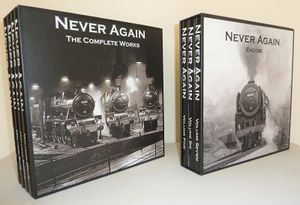 The Master Neverers Association ("MNA") were a group of photographers who set out to record the last days of steam on British Railways, the group's name reflecting their determination Never to give up their quest for the ultimate Master Shot. "Never Again", a four volume set of books about their exploits and showing some of their finest Master Shots, was published in 2018.[1] In May 2021 the MNA announced plans for the publication of a further six volumes.[2] The next three volumes titled "Never Again - Encore" were published in September 2021. The final three volumes will be titled "Never Again - Finale".

A number of members of the MNA have associations with the SVRSevern Valley Railway; their names are shown in bold below. Many other members went on to have similar associations with other heritage railway organisations, in particular the North Eastern Locomotive Preservation Group (Maurice Burns, Ken Groundwater, John Hunt and Peter Proud).

The 'members' of the MNA whose work was published in "Never Again" were:

By the time the MNA had become a functioning group in the early 1960s, many of the services in the West Midland area had already moved over to diesel and electrification and rebuilding was taking place at Birmingham New Street.[12] With the decline of steam in the area, the MNA members began to travel further afield, meeting and being joined by other members around the country.

Members of the Association travelled widely around the country, often sleeping in P-way huts, barns, hay lofts, signal boxes, waiting rooms and empty coaching stock. They would visit engine sheds, sometimes clandestinely in the early hours of the morning, to clean engines which they knew were working the following day and wanted to photograph.

Paul Riley became the unspoken leader of the group, as described in Never Again, not by design but more likely as a result of his can do, must do, never fail and sometimes extreme approach to getting the Master Shot. From time to time members of the group photographed each other 'in action' and Never Again included pictures of Paul up trees, scaling an HV pylon, and waist deep in a river.

Other activities included repainting tunnel mouth insignia and name boards, and making wooden replica nameplates and number plates for locomotives. Footplate crews would sometimes be 'persuaded' to put on a good show, and members would 'blag' a footplate ride from time to time, including a 98mph run on City of Coventry up the Trent Valley in the weeks before the loco was withdrawn.

After photographing the "Fifteen Guinea Special" on 11 August 1968, the last BRBritish Rail or British Railways steam working, the MNA retired to the Station Inn at Ribblehead to 'seek solace'. Since then the surviving members have held an annual reunion there which they attend whenever possible[1]. The 53rd annual reunion took place on 8 August 2021[13].