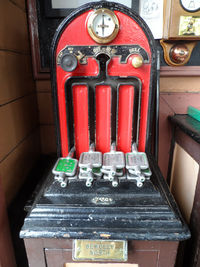 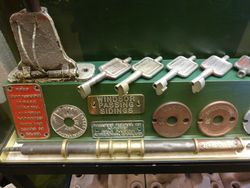 An electric train staff from Bridgnorth (bottom) and original tokens from Sutton Bridge Junction to Coalport (top)
Early railways used slow speeds and had frequent passing places, so it was safe for trains to be driven 'on sight' as far as the driver could see was clear. Communication between stations to confirm train movements was by means a of single needle telegraph. This form of working was used when the Severn Valley Railway first opened in 1862.

However as speeds and distances between passing places increased, it was quickly found that more complex systems to avoid collisions were needed on single lines. At first this was done using a unique object called a 'train staff' for each section of line, which the driver of each train was required to carry with him. As there was only one staff for each section, this ensured only one train could be on the line at once. It worked well if trains always alternated in direction, but if two trains in succession were required to travel in the same direction, the token had to be walked back to the start after the first train. To overcome this a ‘divisible’ staff could be used, with successive trains carrying a portion of the staff and no return working being possible until the entire staff had travelled through the section. An alternative was the 'staff and ticket' system; the first train would be shown the staff and given a paper or metal 'ticket' to carry on the engine. The final train of a group travelling in the same direction would carry the staff itself. Staff and ticket working was introduced throughout the Severn Valley Branch in 1891.

With the staff and ticket system, there was little to stop the signalman issuing tickets improperly. Token systems were developed as one way around this problem, using electrically-connected machines called 'token instruments' to hold a set of objects like the earlier train staff, called 'tokens'. The machines were designed to be linked in pairs, with each pair of machines sharing a set of tokens, and electrically interlocked so that only one token in the set can be removed from the instruments at any time. The first token instruments used metal batons ('electric train staffs') or discs ('tablets'), and tokens always had to be removed from one machine and returned to the other. Electric staff working was first introduced on the Severn Valley Branch in 1894.

Examples of early tokens and instruments may be seen in Kidderminster Railway Museum. 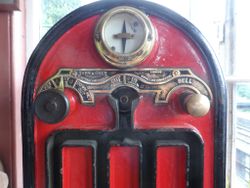 Close-up of a token instrument, with telegraph needle at the top, and indicator, commutator and bell plunger below.

The largest part of each token instrument is a 'magazine' consisting of four vertical channels, which stores each machine's stock of tokens. Because each token has a large head, wider than each channel, they can be moved around inside the magazine but not removed. Above the magazine is a lock mechanism called a 'commutator'. This is the only route by which tokens may be taken from or placed into the instrument, by turning the token like a key in a lock.

Tokens can be placed into an instrument at any time, if they fit, but a token can only be removed if all the tokens are in the two instruments, and the signalman at the other signal box is holding down the bell plunger on his instrument.

Each instrument is numbered, and each token, like a key, only fits into the correct instrument. The tokens are also stamped with the names of the signal boxes at either end of the section they apply to, and are colour-coded, with all the tokens in a set having their handles painted a distinctive colour.

When a token has been removed from an instrument, it is usually placed in a 'token carrier', a metal holder which is about the same size and shape as an unstrung tennis racket. This enables the tokens to be passed to and from moving trains. 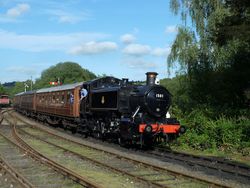 As the train arrives, a token in its carrier is held out for the signalman to collect.

The signalman sending a train will alert the receiving signalman with the "Call Attention" bell signal, and when he or she responds will, by bell signal, ask "Is the line clear for [this kind of train]", there being different signals for different train types. If the receiving signalman accepts the train, he or she will acknowledge this by repeating the signal back, keeping the bell plunger held down on the final beat of the signal. The system verifies that the sent and acknowledged codes are the same, ensuring that both signalmen have the same understanding of the type of movement taking place. Provided this is so, holding down the plunger releases the mechanism of the sending signalman's token instrument, so he or she can remove a token. When the signalman removes the token both signalmen will set their indicators to show that a token is out, and which direction it is travelling in.

Removing the token will unlock the signal which allows trains to enter the section of line between the two signal boxes. The signalman will clear this signal, put the token into a token carrier, and give it to the footplate crew, who will read the signal box names on the token out loud so all of the crew know they have the right token for their journey. As the train departs, the sending signalman will check it is showing the correct tail lamp at the end of the train, and send the "Train Entering Section" bell signal to the other signalman. Both signalmen will update their train registers to reflect the train movement and the time at which it took place.

The electrical interlocking between the two token instruments ensures that a second token for the section cannot be issued from either instrument until the first token has been returned to one or the other instrument. Normally this would be the other instrument, but in the event that a train movement is authorised but then cancelled for some reason, the token could be returned to the same machine from which it was issued with the signal suitably restored to danger.

When the train arrives at the second signal box the crew will hand the token, in its carrier, to the signalman there. When he or she has seen the tail lamp on the back of the train, to prove the whole train has cleared the section, he or she will place the token in their instrument, put their indicator to normal, and send the "Train Out Of Section" bell signal to the sending signal box.

When two trains are passing each other at a signal box, the sequence of operations is slightly more complex. This is because only one train is allowed to enter the crossing loop at once, to minimise any risk in the rare chance that either train overruns any signal.

The signalman at the crossing place will keep all his or her signals at Danger until the first train arrives and stops outside the station. He will then clear the signal for that train - let's call it Train A - to enter the station, and collect the token from it as it arrives.

When trains are crossing at a station, the signalman needs to be able to put the tokens back in the instruments before he has been able to see the tail lamp on the back of the train. Because of this, when a train arrives at a crossing station, the train's guard will tell the signalman that the train has arrived complete with tail lamp. When the guard of Train A has done this, the signalman can put the token he has just collected into the token instrument. He will then immediately ask to take it out of the instrument again, for Train B to go back in the opposite direction. If Train B has arrived, it will have been kept waiting outside the station. Once the signalman has the token he needs to give to Train B, he will clear all Train B's signals then go and exchange tokens with Train B, collecting a token from the train crew with one hand and handing the new token over with the other.

Once Train B's guard has told the signalman that his train has also arrived complete with its tail lamp, the signalman can repeat the token procedure with the token he has just received from Train B, again immediately requesting to take it out again to give to Train A. When he has taken it out, he will clear Train A's signal to depart and walk down to the engine to hand the token over to the train crew. By the time this has been done, Train B will probably be ready to leave, if not actually pulling out of the station. When the signalman returns to the signal box he will send the "Train Entering Section" bell signals for Train B, and for Train A as it leaves. As before, he still has to check that both trains are showing the correct tail lamp on the end.

Because of this procedure, it is normal that the first train to arrive at a crossing place is usually the last one to leave it. The timetable will be written to take account of this. The timetable is also normally written to try to make sure that the first train to arrive will be the one on the furthest track from the signal box. This makes things much easier for the signalman and helps the crossing go more smoothly, because the signalman will have less walking to do.

If the token instruments are not working properly, so that tokens cannot be taken out of the instruments, the safety of trains is maintained by appointing a member of staff as a 'Pilotman'. He takes the place of the tokens, by travelling back and forth on the footplate of each train according to the signalmen's instructions. Because tokens are not being withdrawn from the token instruments the section signals remain locked at Danger, so the Pilotman, under the signalman's instructions, tells the train crew when it is safe to pass these signals at Danger.

The Pilotman can be identified by a red armband that he must wear at all times. Strictly speaking, Pilotman working is closer to the 'staff and ticket' working described above that to token working. If more than one train will be travelling in the same direction, the Pilotman will write out a 'Pilotman's ticket' for the first train(s) to carry, and will travel on the last one. 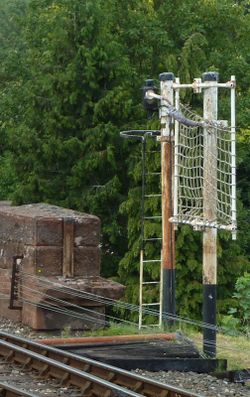 The working methods described above require the train to pass the signal box slowly so the exchange of tokens can take place safely. Some companies developed locomotive and lineside equipment to allow the automatic exchange of tablets at high speed which, in conjunction with appropriately aligned passing loops, enabled express schedules to be maintained on single line routes. One company to use such a system was the Midland & Great Northern Joint Railway, where LMS Ivatt Class 4 43106 and other members of the class carried Whitaker token exchange apparatus fitted into a "pocket" towards the front of the tender[2].