From SVR Wiki
Jump to: navigation, search
Clayton Class 17 D8568 is the only surviving example of the Clayton Type 1s which numbered 117 in total. The locomotive is based at the Chinnor & Princes Risborough Railway and is used during the running season and at special events. It is owned by the Diesel Traction Group. It was hired by the SVR from May to September 2017 and has also attended a number of Diesel galas.

Intended by British Railways as the standard Type 1The British Railways classification for diesel locomotives of up to 1000 bhp for the railway system, supplanting the EEEnglish Electric type 1 (later class 20), poor reliability meant withdrawals began as early as 1968, when some members were just four years old. Although the Class was allocated a TOPS code, none of the locomotives survived long enough for renumbering.

Three variations of the class were built:

The Class was equipped for multiple working with 'Red Diamond' (Class 17/3: 'Blue StarAn electro-magnetic form of multiple working equipment widely used by BR in first generation diesel locomotives and multiple units whereby multiple like-coded vehicles are capable of running under the control of one driver. A blue star coupling code is normally indicated on the front of the vehicle.') locomotives. Although D8568 is the unique survivor one of each sub-class 17/1 (8521) and 17/3 (8598) survived into BRBritish Rail or British Railways DepartmentalRolling stock used for the railway’s own functions (engineering etc.) rather than for general passenger or goods traffic. service at Derby Research Centre until 1978.[1]

D8568 spent all of its working life in Scotland where it was delivered on 6 January 1964, to Haymarket, moving to Polmadie on 28 September 1968. It remained operating at this depot until it was withdrawn from service on 6 October 1971.[2]

Sold from Polmadie, D8568 went to Hemelite of Harpenden, a cement company on the former branch line between Harpenden and Hemel Hempstead. It arrived under its own power on 11 September 1972, to become the first 'privately owned' ex-main line diesel loco to break the 'no private diesels BRBritish Rail or British Railways ban'.

D8568 was sold to Ribble Cement (now Castle Cement) and moved to Clitheroe, arriving on 24 June 1977. D8568 was repainted into the new owning company colours of light grey upper body with the running plate, bogies and underframe in dark green. The company logo of a castle was applied to the cab sides and nose ends. 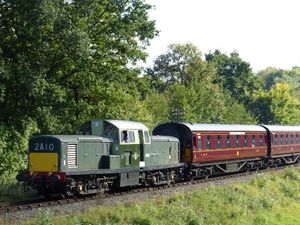 D8568 passing Highley, September 2015
Purchased by the DTG it left Clitheroe on 9 February 1983 for the North Yorkshire Moors Railway, returning to traffic 22 April 1989. On 25 April 1992 it arrived at its present home on the Chinnor and Princes Risborough Railway.