Initially the locomotives were used to haul express passenger trains on the West Coast Main Line (WCML) between Crewe and Scotland; that section not then being electrified. This often entailed ‘Multiple Working’, with two locomotives under control of a single driver.

By 1974 the northern WCML had been electrified, and the Class 50 fleet was being transferred to BR’s Western Region to work main line passenger services out of London Paddington.

The Class 50s did not originally carry names, but in the late 1970s BR agreed to their being named after Royal Navy vessels with notable records in the First and Second World Wars.

Withdrawal of the class began in the early 1990s.

D407 entered service in August 1968,[1] having been built by English Electric.

50007 was named Hercules on 06 April 1978, after the British battleship of the same name. On 25 February 1984, the locomotive was outshopped in Brunswick Green and renamed Sir Edward Elgar, to commemorate the 150th anniversary of the Great Western Railway.[1] After being withdrawn on 16 July 1991, the locomotive was re-instated for railtour service, and was one of the two Class 50 locomotives to haul the final BR Class 50 railtour, the 50 Terminator.[1][2] 50007 was the second to last member of the fleet, being retired on 26 March 1994. 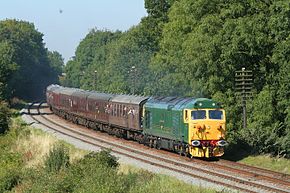 50007 on the Great Central Railway in 2009, in GWR livery and named Sir Edward Elgar 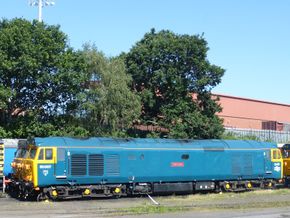 In 2013, the locomotive was sold to a private owner and relocated to Washwood Heath, where it was repainted from GWR Green to BR Blue, and re-named Hercules.[2] The Class 50 Alliance acquired the locomotive in November 2016, being fitted with the relevant equipment for mainline running. 50007 was moved to the SVR on 16 January 2017 and that year saw her at Kidderminster TMD where her generators were removed, sent away for overhaul and refitted, before planned haulage of a number of railtours in 2017 and 2018 to commemorate the 50th anniversary of the introduction of the class.[3]

50007 became the first locomotive to use the newly installed lifting jacks in the Diesel Depot when it was lifted for maintenance on 4 November 2017.

On 20 March 2019 freight operator GB Railfreight and The Class 50 Alliance unveiled 50007 and 50049 Defiance in GBRf livery, with the locomotives available to operate selected GBRf trains on a ‘spot-hire’ basis.[5][6]

In mid-2021 one side of 50007 was temporarily re-designated as 50034 "Furious" as a thank you to GBRf charter manager Paul Taylor for his prostate cancer charity fundraising efforts; Furious was his favourite class 50[7].