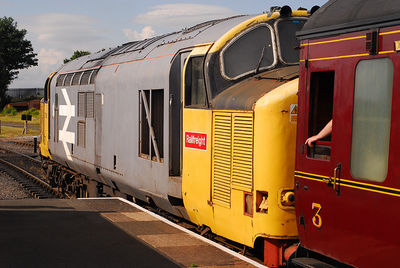 British Rail Class 37 diesel locomotive 37906 was built in 1963 and rebuilt with an experimental engine and generator combination in 1987. It was resident on the SVRSevern Valley Railway for several years in the 2000s, leaving the railway in 2014. A summary of the Class 37 can be found on the 37308 page.

37906 was built at EEEnglish Electric's Vulcan Foundry in Newton-le-Willows, works number 3384, and entered service in November 1963 numbered D6906.[1] The loco spent most of its working life in South Wales, allocated to Landore Depot in Swansea,[2] with short spells at Cardiff Canton, Bristol Bath Road and Plymouth Laira.[3] It was renumbered to 37206 in 1973.

In the mid-1980s British Rail was evaluating diesel engines for new locomotive designs such as the proposed but never-built Class 38. In 1986-87, six Class 37 locos were used to trial two potential engines, the Mirrlees MB275T and the RustonRuston and Hornsby Ltd. of Lincoln, engineer and locomotive manufacturer acquired by English Electric in 1966. Also, Ruston-Bucyrus Ltd established in 1930 and jointly owned by Ruston and Hornsby and Bucyrus-Erie (US) RK270T. 37206 was fitted with the latter engine and a GEC alternator, and like the other five locos received new bogies and additional ballasting to increase its weight to 120 tons. The experimental locomotives became the 37/9 subclass, and 37206 became 37906, the only Class 37/9 to retain the last two digits of its previous number. Along with the rest of subclass 37/9, 37906 returned to South Wales for use on heavy freight work.[4]

In a few days in April 2007 GEC control cards were stolen from 37905 at both Meldon Quarry and 37906 at Kidderminster. These cards were of use on only a handful of locomotives, and the theft necessitated the production of a new control card at considerable expense.[6]

In November 2013, the RustonRuston and Hornsby Ltd. of Lincoln, engineer and locomotive manufacturer acquired by English Electric in 1966. Also, Ruston-Bucyrus Ltd established in 1930 and jointly owned by Ruston and Hornsby and Bucyrus-Erie (US) 906 Group announced that they felt the group was no longer large enough to keep the loco in working order, and had therefore agreed to sell it to Europhoenix to be returned to main line use.[9][10] The sale completed in March 2014, and the loco left the SVRSevern Valley Railway by rail dead in tow on 11 May that year.[11]