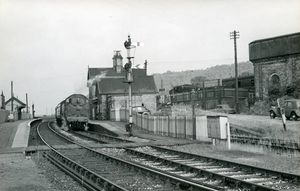 A Westbound train on the Severn Valley line, with another in the Much Wenlock branch platform behind (Sellick Collection) 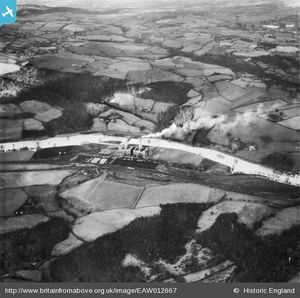 An aerial view of Buildwas station and Ironbridge A Power Station in January 1948. The photo is looking north, and the lines from Shrewsbury and Much Wenlock are at the left, and from Bridgnorth and Coalbrookdale on the right. Image from Britain from Above

Buildwas station was situated 28½ miles from Hartlebury and 12¼ miles from Shrewsbury. It was an interchange station in open countryside with no passenger access other than by rail, and was built on two levels. The station building was of a similar design to that at Bewdley. 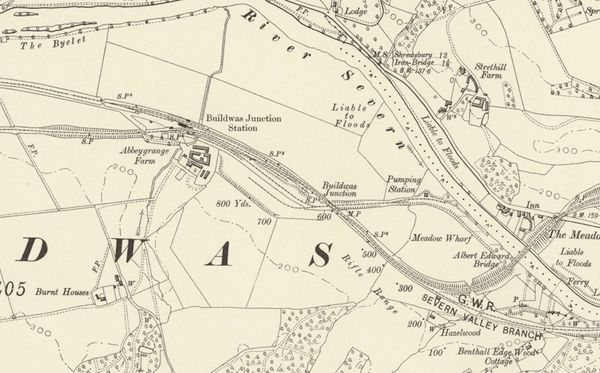 Approaching the station from the south, the single track Severn Valley Line was joined from the right by the double track line from Coalbrookdale, which crossed the river via the Albert Edward Bridge. In the short distance between the bridge and the station, the Much Wenlock line (the Much Wenlock and Severn Junction Railway before incorporation into the GWR) began to branch off to the left and climb, the single platform for this branch being on a higher level than the two platforms for the Severn Valley Line (at opening on 1 February 1862, Buildwas was the first station at which trains leaving and approaching Shrewsbury could cross).

A new power station came into use in 1932, requiring extensive additional sidings and a new signal box to handle the coal traffic. The station also handled limestone traffic from the quarries on Wenlock Edge.

In the early 1960s a second power station, Ironbridge B, was in course of construction. The station closed along with the Severn Valley Line in 1963, and was demolished in 1964 to make way for a new coal handling plant for the power station.

The station was named Buildwas in timetables, and also appeared as such in the 1963 notice of closure. However the station running in board showed the name as “Buildwas Junction”;[1] this version was also shown on Ordnance Survey maps as above.

Traffic at Buildwas originated from the Wellington and Much Wenlock lines as well as the Severn Valley Branch. The opening of the coal-fired Ironbridge Power Station in 1932 brought about a significant increase in freight traffic.