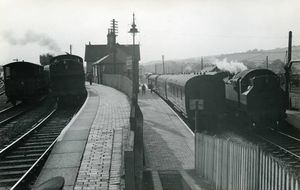 The "Wellington to Craven Arms Railway" crossed the Severn Valley branch at Buildwas. It provided a through route from two junctions at its northern end near Wellington on the Shrewsbury and Birmingham Railway to a junction at its southern end at Marsh Farm, a short way north of Craven Arms on the Shrewsbury and Hereford Railway. It was not built as a single railway, but was completed in stages over time by a number of railway companies which eventually became part of the Great Western Railway branch network.

The completed route went by a number of different names. The relevant section of the GWRGreat Western Railway 1902 timetable referred to the branch as "Wellington, Much Wenlock and Craven Arms", while the BRBritish Rail or British Railways(W) Service Timetable for 1949 opted for "Wellington, Coalbrookdale and Craven Arms". This Wiki has adopted the shorter description of "Wellington to Craven Arms Railway" used on Wikipedia.

The map (right) shows the railways present in the area when the Severn Valley Railway opened in 1862.

The branch from Ketley Junction (coloured red on the map), which faced west towards Wellington and Shrewsbury, was instead completed by the Wellington and Severn Junction Railway (W&SJR) with technical assistance and some financial help from the S&BRBritish Rail or British Railways. The company was authorised to construct the line as far south as Coalbrookdale and by May 1859 had completed the triangle by linking the S&BRBritish Rail or British Railways line at Ketley Junction to join with the Madeley Branch at Lightmoor. However they were unable to raise funds for the last two miles to Coalbrookdale which included the most difficult terrain. The W&SJR's branch was operated by the Coalbrookdale Company until 1 July 1861 and thereafter under lease by the West Midland Railway ("WMR") and the GWRGreat Western Railway.[1] The W&SJR was completely vested in the GWRGreat Western Railway on 1 July 1892.[2]

Much Wenlock and Severn Junction Railway

At opening, Buildwas was the only junction on the Severn Valley Railway other than at the two ends[note 1]. 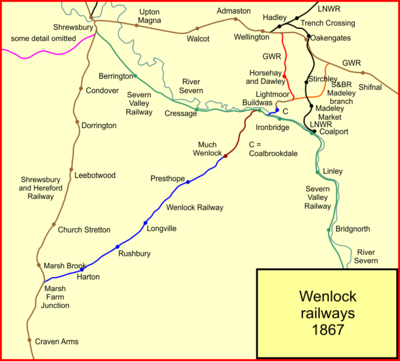 At the same time as preparing the first plans on behalf of the WMR and SVRSevern Valley Railway companies for the Kidderminster Loop Line in 1860, Edward Wilson also prepared plans for a 'Lightmoor branch' from Benthall Edge on the SVRSevern Valley Railway, crossing the Severn and passing through Coalbrookdale to join with the WJ&SJR at Lightmoor. A Bill for both plans went before Parliament, but in June 1961 the section relating to the Lightmoor branch was struck out in favour of a Bill presented by the Wenlock Railway, originally incorporated when the Bill was enacted later that year as the "Much Wenlock, Craven Arms and Coalbrookdale Railway".

The Wenlock Railway was authorised to construct two railways (both coloured blue on the map). "Railway No. 1" would continue southward from the MW&SJR at Much Wenlock to connect with the Shrewsbury and Hereford Railway at Marsh Farm Junction, three miles north of Craven Arms. "Railway No. 2" would provide a short extension north from Buildwas across the River Severn to Coalbrookdale.[3] The plans, which included the construction of Albert Edward Bridge, were drawn up by John Fowler and approved by Parliament in July 1861.[2]

South of Much Wenlock, opposition from local landowners at Presthope required a deviation to the route including a 207 yard tunnel under Wenlock Edge. "Railway No. 1" opened for goods traffic as far south as Presthope on 5 December 1864, which enabled limestone to be transported from the Wenlock Edge quarries to the Coalbrookdale iron foundries. However funding difficulties meant the last 11 miles to Marsh Farm Junction did not open for passenger traffic until December 1867.[2] The journey time for the complete through route from Wellington to Craven Arms was around 90 minutes for the 28 miles.[2]

During the 1890s both the Wenlock Railway and the W&SJR were fully absorbed by the GWRGreat Western Railway.

Connection with the Severn Valley branch

There were a number of similarities between Buildwas and the Severn Valley branch's other junction station, Bewdley. Both initially became a junction at the terminus of the intersecting line, before eventually becoming a 'through junction' (in the case of Bewdley with the opening of the Tenbury Branch in August 1864 and the Kidderminster Loop Line in 1874 respectively). In both cases (considering the Severn Valley branch in overall north/south terms) the intersecting 'railways' joined from the east and crossed the SVRSevern Valley Railway to south of the station, passed through the station on a single platform and then diverged to the west. The station buildings were also of a similar appearance.

The layout of the junctions at Buildwas and Bewdley meant that it was theoretically possible for northbound traffic on the Severn Valley branch to turn towards Much Wenlock and the Tenbury Branch respectively, while southbound services could turn towards Coalbrookdale and Kidderminster respectively. At Bewdley, some southward passenger services on the Severn Valley branch in the nineteenth century began to divert onto the alternate route to Kidderminster rather than continuing to Hartlebury, thereby acting as a true 'junction'. However there is no evidence in the various Timetables in commercial service to suggest passenger services at Buildwas ever made a similar diversion from one branch to the other. Passengers wishing to make such a journey always needed to change trains.

The main picture (top right) shows Buildwas station in 1961. The Severn Valley branch can be seen to the right, where two passenger services are crossing. The single platform on the left serves the Wellington to Craven Arms Railway; the direction in which the passenger service is facing suggests it has arrived from Much Wenlock and will continue towards Wellington. On the extreme left a goods service is standing in the goods loop, presumably awaiting departure to Much Wenlock.

'Merry-go-round' coal trains for the Ironbridge power station continued to arrive via Madeley Junction, Lightmoor Junction and Albert Edward Bridge until the power station closed in 2015.

South west of Much Wenlock, much of the trackbed on Wenlock Edge between Presthope tunnel and Longville now forms part of the 'Jack Mytton Way' footpath.