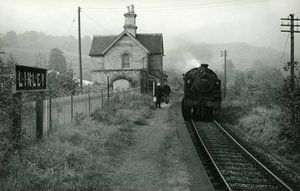 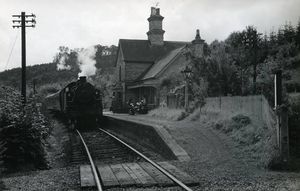 Linley Station was located 22½ miles from Hartlebury and 18¼ miles from Shrewsbury. It was the first station north of Bridgnorth, and had a single platform with no passing loop. 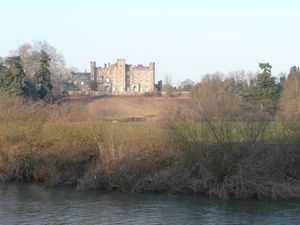 Apley Hall in 2008, seen from near the location of Linley Station 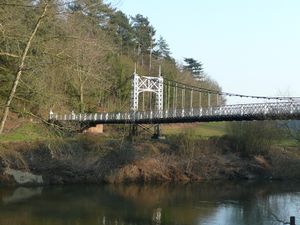 The Severn Valley Railway passes through the Apley Park estate, owned at the time of the line's construction by Thomas C Whitmore. Although his property was located on the opposite bank of the River Severn, Whitmore opposed the Railway's construction as "utterly annihilating the privacy and seclusion of the said, mansion, house, park and grounds". Whitmore had already sponsored a rival and ultimately unsuccessful proposal, the Shrewsbury, Ironbridge and Bridgnorth Railway whose route was planned to cross the Severn at Quatford, south of Bridgnorth and pass to the east of Apley Park before joining Shrewsbury and Birmingham Railway's Madeley Branch. A Bill to construct that railway was introduced to Parliament in February 1853 but was thrown out in June of that year.[1]

Despite his initial opposition to the railway, Whitmore cut down a number of trees after the railway opened in 1862, so that he could have a better view of passing trains. However he died on 13 March 1865, aged only 58[2] (expectancy would have been about 70).[4]

On 8 June 1862 a porter at Linley left the station a little before midday, having confirmed to the station-master that he would return 'before train time' (5:30pm). In the event he did not return until the following Wednesday morning. He was brought before the South Shropshire Magistrates charged with having "absented himself from the employment of the West Midland Railway Company, without having previously obtained leave or given the required 14 days’ notice". The Bench said the prisoner had rendered himself liable to suffer two months' imprisonment with hard labour, or a penalty of £10. However they had power to mitigate the penalty, and he was to pay a fine of £1 or go to prison for 14 days.[5]

The station was originally accessed from the Hall via a ferry. In 1905 a suspension bridge was built by David Rowell & Co of Westminster[2].

GWR staff records for 1922 show the station had a station master but no other staff.

X: Not recorded. After 1942, all data was recorded under Bridgnorth. 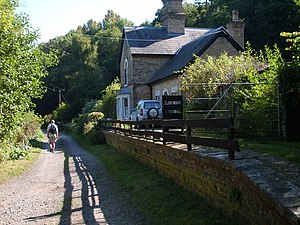 The station had a goods siding as shown on the OSOrdnance Survey maps. The short goods loop was removed in about 1939[6] and the siding was closed altogether on 10 September 1951; the station was officially reduced to the status of a halt at the same time.[2]

Following closure of the line in 1963, the station was converted to a private house.