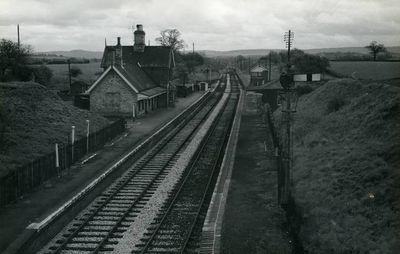 Berrington station in May 1964 (Sellick Collection)
Berrington was the first station south of Shrewsbury on the original Severn Valley line, located at milepost 168m 12c, 36½ miles from Hartlebury and 4¼ miles from Shrewsbury. It was situated close to the village of Cross Houses and about half a mile from the village of Berrington itself. The 1901 Census recorded the local population as 928, including the 'inmates' of the Cross Houses Union Workhouse.[1]

The station closed on 9 September 1963, when passenger services between Bewdley and Shrewsbury were withdrawn by BRBritish Rail or British Railways. Through freight services continued until 30 November of that year, after which the signal box was taken out of use on 2 December 1963.

The line through Berrington was maintained in working order for the move of boilers and other large equipment to Ironbridge power station which took place on 22 April 1966, after which time the line south of Berrington was completely closed and the track lifted.[3] The section of track between Berrington and Shrewsbury continued in use for testing Sentinel diesels until finally being closed by BRBritish Rail or British Railways on 21 January 1968.[4]

The station is now a private residence and small business.[5]

In common with all stations on the Severn Valley Railway throughout that time, revenue from freight exceeded that from passenger services. The decrease in tickets sold from 1903 to 1938 was proportionately greater at Berrington than any other station on the Branch.[6]