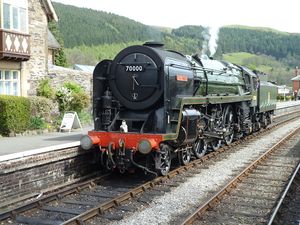 BRBritish Rail or British Railways Standard Class 7 No 70000 Britannia was resident on the SVRSevern Valley Railway between 1971 and 1980.

Initially 70000 was stored as a candidate for the National Railway Museum’s National Collection. However due to her prototype design and construction differences, and also to accident damage caused in a collision at Manchester shortly before withdrawal, the NRM instead selected 70013 Oliver Cromwell which had been maintained in good condition for the ‘end of steam’ enthusiast specials. Britannia was eventually bought by The Steam Locomotive Preservation Company Ltd in 1970.[1]

Britannia arrived at the SVRSevern Valley Railway in April 1971 for restoration to be completed. The locomotive was delivered to Bridgnorth on 9 April 1971 behind 43106. Members of the preservation company’s supporting body, the Britannia Locomotive Society, undertook much of the restoration and fundraising work having also become members of the SVRSevern Valley Railway for insurance purposes.[1]

Restoration began shortly after arrival. 70000 was steamed for the first time in 12 years on 18 May 1978. The locomotive was then renamed ‘Britannia’ at a ceremony at Bridgnorth on 20 May 1978 by Mr R A RiddlesRobert Arthur "Robin" Riddles, Member of the Railway Executive for Mechanical and Electrical Engineering responsible for the design of the British Rail Standard Class locomotives, the locomotive’s designer.[2] Following a test run to Hampton Loade on 7 September, Britannia worked services with the Bulmer's Pullman set between Bewdley and Foley Park during the 1978 Autumn Enthusiasts event on 9-10 September, although it was noted that further work was required on the boiler.[3] A total of 275 miles were recorded on 8 steaming days in 1978.[4]

70000 recorded a further 80 miles in 1979,[5] but by mid-year was awaiting boiler repairs.[6] In Spring 1980 the SVRSevern Valley Railway announced that it would be unable to finance these further repairs and that the Britannia Locomotive Company had decided to remove the locomotive to the Nene Valley Railway.[7]

A major factor in the minimal use on the SVRSevern Valley Railway before departing was the locomotive's weight of 94 tons and axle load of 20 tons 5cwt which made it too heavy for the line at the time - in particular it was not allowed over Victoria Bridge with a full boiler.[8]

After a period of ownership by Pete Waterman, the locomotive was bought by Jeremy Hosking and was transferred to the Royal Scot Locomotive and General Trust.[9] Britannia returned as a guest locomotive for the 2015 and 2018 Autumn Steam Galas. It is operated on the main line by Icons of Steam.[10]

Footage of the delivery of 70000 from Crewe to Bridgnorth on 4 September 2018 was included in the UKTV programme Train Tuckers first broadcast 30 August 2019.

70000 re-visited the SVRSevern Valley Railway in early 2022 for running in tests after an overhaul, arriving by road on 25 January and leaving by rail on 16 February[11].