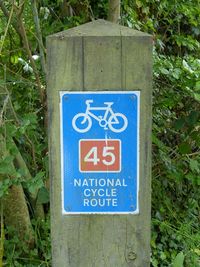 Part of the 270 mile National Cycle Route 45 follows the Severn Valley between the Ironbridge Gorge and Bewdley, utilising the former trackbed and crossing the present day railway twice.

The Cycle Route crosses from the east bank of the River Severn to the west bank via Abraham Darby’s bridge at Ironbridge. From the site of the former Ironbridge station, now the main town car park, it then closely follows the disused trackbed southwards via Jackfield Halt, Coalport and Linley to the edge of Bridgnorth Golf Club. From there the Route follows roads through the town, continuing up Hollybush Road where it passes under the footbridge outside Bridgnorth Station and crosses the former line between the station and Bridgnorth Tunnel.

There are a number of farm crossings between Hampton Loade and Country Park which also cross the Cycle Route.

Route 45 on the Sustrans web site