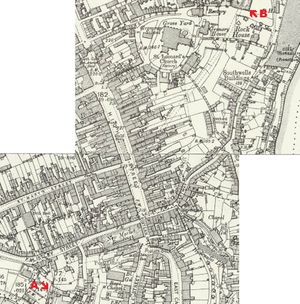 Map of the route of the tunnel

The first plans drawn up for the Severn Valley Railway and authorised in the 1853 Act of Parliament showed the course of the line deviating to the right shortly after Sterns to cross the River Severn near Danesford, with the station being situated in Low Town east of the river. Beyond Bridgnorth a second bridge would have returned the line across the Severn to re-join its eventual route. However the potential cost of the bridges, allied to difficulties in raising funds for construction of the line, resulted in the line remaining west of the Severn, requiring a tunnel under Bridgnorth High Town immediately north of Bridgnorth Station.

The original contract of May 1858 between the Severn Valley Railway Company and the appointed Contractors Peto, Brassey and Betts stated that tunnels were to be 24ft wide and not less than 16ft high at the centre and brick lined if the Engineer specified this was necessary. Bridgnorth Tunnel was to be built without shafts and without disturbing any buildings.[1]

On 9 August 1858 Chief Engineer John Fowler reported to the half-yearly shareholders' meeting that "...the cutting through the sandstone rock at the entrance to the tunnel under the town of Bridgnorth is begun."[2] However in October 1858 it was reported that work at Bridgnorth had been suspended due to the opposition of Thomas Whitmore.[3] The differences were reportedly resolved in November 1858.[4]

Tunnelling was carried out from both the northern and southern ends, but the work proved difficult due to the curves at each end. In May 1859, Bridgnorth Town Council gave permission for a shaft to be sunk from the High Street so a small heading could be driven out in each direction to facilitate completion of the work.[5] On 2 September 1859 the headings between the shaft and New Town met "…in the most satisfactory manner." Mr Dowell (the Engineer for Thomas Brassey) and his assistants together with Mr Hassall the sub-contractor walked through the tunnel from New Town and climbed the shaft to the High Street to be met by a large crowd.[6] The shaft was then filled, but the Town Council gave permission for a 3 inch ventilation pipe to be installed at the side of the Town Hall "...to carry off the foul air from the tunnel."[7]

In April 1860 a navvie was severely injured when a large mass of the rock gave way while he was digging in the tunnel.[8] In November 1860 a contemporary newspaper report related "FALLING IN OF A RAILWAY TUNNEL. - An accident; which, had it taken place an hour sooner, would have imperilled the lives of 17 human beings, has occurred on the SEVERN Valley Railway, a new line is course of construction from Shrewsbury to Stourport. Close to Bridgnorth, an extensive tunnel is in course of excavation, which will partially run under the town. Above the entrance, and for some distance into the tunnel, there was a thickness of some 30 or 40 feet of soil, in which a number of large trees were rooted. The usual props and supports had been used to keep up this mass while the brickwork was being executed. Sixteen men were employed in the tunnel, and these had only left work about an hour when the superincumbent mass fell in, chocking up the tunnel with earth, rock, and trees, for a distance of 50 feet. It is expected that this accident will somewhat retard the opening of the line, which was fixed for next May."[9]

In February 1861 FowlerHenry Fowler, Chief Mechanical Engineer (CME) of the Midland Railway 1909-1923, and of the London, Midland and Scottish Railway 1923-1933 reported that the tunnels, including Bridgnorth, were complete apart from the fronts. His August 1861 report advised that the tunnels were almost completed. Final inspection of the whole line took place in December 1961 ahead of the public opening on 1 February 1862. [10]

The completed tunnel was 550 yards long (in comparison, Bewdley Tunnel is 480 yards), with a double curve right and left. The original bore varied between 19ft width at the north end and 16ft 8in width at the south end, substantially less than the 24ft width which Chief Engineer John FowlerHenry Fowler, Chief Mechanical Engineer (CME) of the Midland Railway 1909-1923, and of the London, Midland and Scottish Railway 1923-1933 specified as necessary for double track working. The tunnel was re-lined in 1911, further reducing the width to 15ft[11].

History since closure of the line

In summer 2003, SVRSevern Valley Railway News noted that BRB (Residuary) Ltd (BRBR) had put Bridgnorth tunnel up for sale. The SVRSevern Valley Railway having been offered first refusal, the structure was unsold and was transferred to Highways England Historical Railways Estate when BRBR was abolished from 30 September 2013.[14][15] In December 2017 a Freedom of Information request was submitted to Highways England asking for details of all former railway tunnels that are inspected and maintained by Highways England.[16] The list produced in response included Bridgnorth Tunnel.[17]