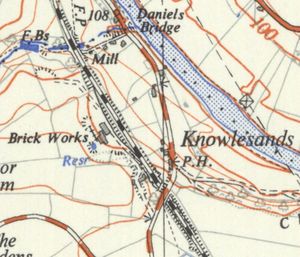 Knowlesands Sidings were situated around ¾ mile south of Bridgnorth station, midway between Knowlesands Tunnel and Oldbury Viaduct. They took the form of a loop to the west of the line, capable of holding 35 standard wagons plus engine and brake van. The sidings served Knowlesands Brick Works, and opened in 1922. Their location is shown on the extract from the Ordnance Survey Map, 1937-1961 series.

The site of the Brick Works is now occupied by the Severn Valley Industrial Estate which can be seen from the railway, although no trace remains of the sidings.

Access to the sidings was controlled by ground frames at either end of the loop. These were unlocked by a key in the end of the Electric Train Staff. The working timetable of 1922 gave instructions that if the 8.15am Shrewsbury to Kidderminster goods was to stop at the sidings, the Bridgnorth signalman should telephone his colleague at Highley, and vice versa for the 8.40am Hartlebury to Shrewsbury goods.

A name plate from Knowlesands North ground frame is on display in Kidderminster Railway Museum.