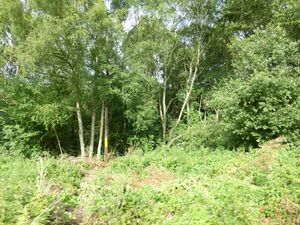 The telegraph pole at Sterns (summer) 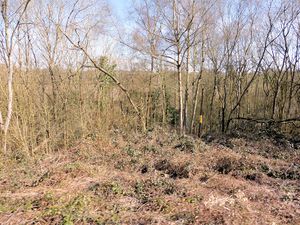 The telegraph pole at Sterns (spring)
Sterns is situated between Hampton Loade and Bridgnorth at the foot of Eardington Bank, at approximately milepost 147. It is at a place where the River Severn approaches close to the railway at almost 90 degrees before turning away southwards towards Bewdley, and is notorious as a maintenance trouble spot due to the ground regularly slipping towards the river on numerous occasions over the history of the railway. During the last Ice Age, the valley of the River Severn was scoured out by glacial action and bands of different types of material were deposited at varying depths. This subsequently resulted in the formation of 'slip-planes' where the different layers can slide over each other, particularly when placed under a load such as the presence of a railway line and especially after periods of heavy rain. Slip-planes exist throughout most of the valley but have resulted in areas of major instability at Jackfield and Sterns.[1]

The line of telegraph poles adjacent to the railway at Sterns vividly illustrates the ground movements that have taken place. One post which stood next to the track until shortly before 1979[2] has been carried a significant distance towards the river by slips since that time and is now only just visible in the trees towards the river. The post is mentioned in the Railway's From The Window booklet as one of the items to see during the journey and it carries a yellow flash to make it more visible.

SVRSevern Valley Railway News and newsletters regularly refer to repair work at Sterns. Some examples are as follows.

Over the winter of 1976-77, intense cold followed by heavy rain resulted in the line dropping 2ft 6" and moving 4ft nearer the river. Permanent way work in progress at Borle Viaduct was halted while repairs were carried out at Sterns. Remedial work enabled the line to re-open in March with trains passing Sterns at the slowest possible speed, repairs there being completed some three weeks later[3].

In 1994-95 ten feet of river bank was washed away, triggering further slippage. 3,000 tons of rock was deposited on the river bank as a temporary measure to protect the bottom of the embankment from further erosion and to 'toe-load' the slip area. A large ditch was also dug alongside the line on the uphill side[1]. 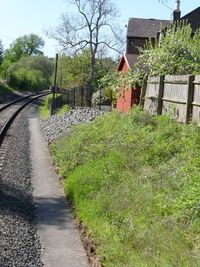 The cap of the 150 foot retaining wall alongside Sterns Cottage

In the Summer 2007 storm damage, the first severe thunderstorm did not affect Sterns. However further slips began in the following weeks as the wet weather continued, both at the area normally affected and further to the north by Sterns Cottage, the house alongside the line on the side nearer the river. 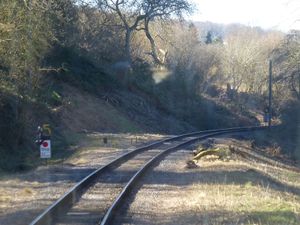 Dip in the line seen from the DMUDiesel Multiple Unit

In mid-February 2014 evidence emerged that further subsidence was taking place when a significant dip in the line appeared at the north end of the Sterns area close to Sterns Cottage. A 'stop and proceed with caution' restriction was put in place until repairs could be completed over the following months. A large concrete sleeper wall was built at the toe of the slip and packed behind with approximately 150 tonnes of ballast. This was topped off with around 200 tonnes of graded stone in order to help to stabilise the slip and drain the water from the embankment. Full-time staff, with the help of hired in plant completed the repairs to the line[4]. 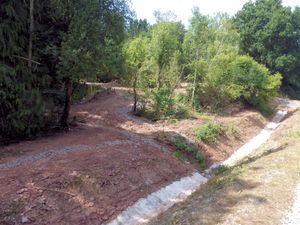 Lineside view of the drainage ditch and repair works uphill from it, looking north 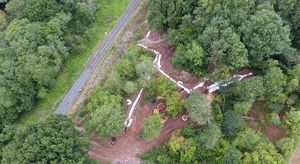 Following extensive flooding in February 2020 land movements were again observed. A comprehensive drainage network was proposed to collect rainwater and transport it to the river in an efficient manner before it could get down to the slip planes and exacerbate the problem.[5] Contractors Walsh Construction completed this water management work by 29 July as planned, with the final item being the lining of the existing drainage ditch with concrete canvas. The work was funded by £120,000 from the SVR Charitable Trust.[6]

The section of line through Sterns was for many years under a strict 5mph speed limit, with the drainage improvements and earthworks in 2013/14 finally allowing for the limit to be increased to 15mph (although further ground movement led to the reinstatement of a lower temporary speed limit soon after). A consequence of this speed restriction is that northbound trains are made to work harder as they are prevented from 'taking a run' at Eardington Bank.

Travelling South on the B4555 follow the road past Eardington station. A large layby can be found on the right hand side of the road which is ideally suited to the location at Sterns, accessed via the left turn just before the road diverges underneath the railway.