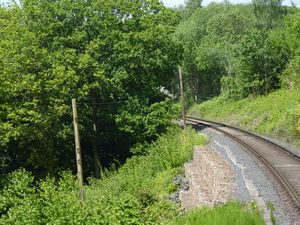 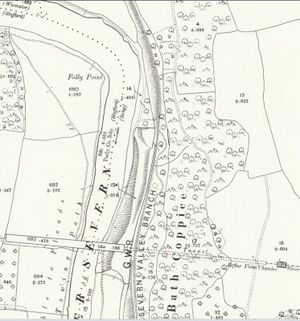 Folly Point is situated between Bewdley and Arley, or more specifically between Northwood Halt and Trimpley Reservoir north of milepost 139½. The area, which takes its name from the promontory on the opposite bank of the River Severn, is the narrowest part of the valley along the line, with the River Severn running close to the line and around 40 feet below it. This has made the area prone to landslips both in history and preservation.

An 1863 article describing the railway referred to a ford at Folly Point, noting that "Between Bewdley and Upper Arley the river is full of shoals and rapids. One of these — the Folly ford — must be a great obstacle to the navigation, as the river falls over a ledge of rock which runs directly across the stream, leaving one narrow passage on the west side through which the boats are steered".

The area received attention from the Permanent Way Department in autumn 1976, including lifting, packing and slewing the track.[1]. In 1977-78 a school project saw children from Warren Farm School in Birmingham make a number of visits under SVRSevern Valley Railway supervision to help clear the land and improve views around Folly Point.[2]

A major slip in 1980 required excavation of the formation to a depth of 2-3 metres stepped downwards in intervals of 1 metre, installation of new drainage, the insertion of stone filled ‘gabions’ and the lifting of the track by around 18 inches over a length of some 60 feet. Services ran only between Bridgnorth and Arley for several weeks while the work was carried out,[3][4] and the slip curtailed the Western Locomotive Association’s spring diesel weekend.[5]

Substantial re-railing was carried out at Folly Point in 1982. Folly Point has some sharp reverse curves and the 'high rail' on the outside each curve is subject to wear on its inside edge as the flanges of each wheel pass, this fault being known as 'side cutting'. On this occasion, rails in better condition recovered from flat bottomed relaying elsewhere on the line were used.[6]

In spring 1993 SVRSevern Valley Railway News noted that a tightening up of workshop and inspection procedures had been introduced following an investigation by Chief Engineer Alun Rees into the causes of a derailment at Folly Point.[7]

In 2006 the area between Trimpley Waterworks and Folly Point was relaid with new concrete sleepers and flat bottomed rail.[8]

The following year, Folly Point was one of the many areas on the Railway affected by the freak storms of June 2007. An inspection on 20 June, the day after the first storm, revealed that the hillside above the railway appeared to be pushing the railway towards the river, with the tops of the gabion baskets now leaning outwards. At the same time the river bank itself was being eroded, threatening to undercut the retaining wall. Within a few hours permission had been granted to tip stones into the river to stem the erosion. The area was then one of the first places along the Railway where remedial work began. The track was lifted, the whole area dug out and new gabion baskets inserted. Progress was halted and the site was evacuated when the hillside above the railway was found to be moving again. Specialist plant was brought in to install drainage, and another stone gabion wall installed above the railway to prevent further incursion. In early August around 60 tons of stone ballast were brought in to allow lifting and packing of the rails to the correct level, after which the track was relaid[9][10].

Immediately south of Folly Point, the Elan Valley Aqueduct carries water from the Elan Valley across the River Severn. During construction of the aqueduct in 1899, a siding known as 'Folly Point Siding' was constructed for the contractor’s use, but removed in 1906 when the aqueduct was completed.[4] The pipes from the aqueduct that pass underneath the SVRSevern Valley Railway metals were replaced in the winter of 2014-15.