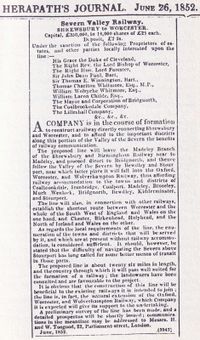 After consideration in Committee, the Bill was passed in the House of Commons in July and presented to the House of Lords on 9 August. It received Royal Assent on 20 August 1853. The Act incorporated the Company and authorised it to raise £600,000 in shares and to borrow up to an additional £200,000. Powers were given to construct a railway from a junction with the OWWOxford Worcester and Wolverhampton Railway 5½ furlongs south of Hartlebury and terminating in Shrewsbury, with a branch from Benthall Edge to Madeley. Opposite Apley Hall, the line was to pass through tunnels approximately 680 yards in length.[7] The original estimate for construction of the line was £600,000, being £110,000 for land plus £490,000 for works.[8]

On 1 September 1853 at the first Board meeting following incorporation, Robert Nicholson’s appointment as Engineer was confirmed at a salary of £1,000 p.a. The following month a deviation at Shrewsbury was proposed, shortening the line to join the Shrewsbury & Hereford Railway south of Shrewsbury. Nicholson prepared a plan and section and a Bill of Parliament was prepared for the 1854 session[9].

It quickly became apparent that economies would be needed to reduce the cost of the line. In February it was decided that the Bill for the Shrewsbury deviation should not proceed beyond a second reading in the Commons. In April Nicholson’s salary was terminated; instead he would be paid for his services as incurred. The Secretary's salary was also reduced. On 19 May Chairman Jonathan Thorp resigned and Morton Peto was elected Chairman in his place.[10].

Nicholson began preparing a revised plan incorporating a number of cost saving measures. These were principally: [10]

Thomas Whitmore naturally objected to the Apley deviation. It was suggested that he should receive compensation of £15,000 plus £150 per acre for land purchased, and on 17 July 1854 Nicholson was asked to see what arrangement he could make. The new plans and sections were deposited on 30 November[10].

Robert Nicholson died at his home in Newcastle on 9 May 1855, at the early age of 46, from a cold which developed into a serious illness. His health may have been weakened by overwork, as he was involved in other projects at the time including the Border Counties Railway which was about to be started. John Fowler, then aged 38, was appointed to replace him.[11]

On 16 June, Morton Peto chaired a special Shareholders' meeting to approve submission of a new Bill to reduce the Company's capital and authorise the deviations. On 12 July, Henry Whitmore testified to the House of Lords Committee on behalf of his brother that Thomas Whitmore was satisfied with the new arrangements and had withdrawn his objections. FowlerHenry Fowler, Chief Mechanical Engineer (CME) of the Midland Railway 1909-1923, and of the London, Midland and Scottish Railway 1923-1933 testified that the revised plan, together with abandoning the proposed Madeley branch, would reduce the cost to £480,000. The new Severn Valley Railway Act received Royal Assent on 30 July 1855. It repealed the 1853 Act, although the Company's incorporated status continued unchanged. The revised route, reduced share capital of £480,000 and borrowing powers of £160,000 were duly authorised, with completion to take place within 5 years.[11]

Efforts to stimulate support for the Railway continued. In early 1856 the Company's solicitor Mr. Toogood visited locations up and down the line in an attempt to attract new shareholders.[12] A meeting of local businessmen and other interested parties was held at Bridgnorth on 1 March, which resulted in a request for Morton Peto to address a public meeting there.[13] Peto agreed, with the public meeting taking place at Bridgnorth Town Hall on 27 March. The press reported that "The meeting was evidently satisfied with the explanations given, by its unanimous and hearty applause. We have much pleasure in stating that the result of the meeting has already begun to manifest itself, for Mr Toogood has since obtained many additional shareholders."[14]

On 15 April Peto addressed a similar meeting at Bewdley, where his speech was regularly met by cheers from those present.[15] A meeting at Stourport on 6 May "...gave general satisfaction, for strong expressions of support were given by most of the persons present."[16]

Another public meeting took place at Ironbridge on 1 July, at which Peto stated that nearly £70,000 had been raised of the £150,000 needed before work could start. The SVRSevern Valley RailwaySVRA:Severn Valley Railway AssociationSVRS:Severn Valley Railway Society Act of 21 July 1856 authorised the new deviations. At the end of July FowlerHenry Fowler, Chief Mechanical Engineer (CME) of the Midland Railway 1909-1923, and of the London, Midland and Scottish Railway 1923-1933 confirmed he had agreed the final route of the line through Apley to Thomas Whitmore’s satisfaction.[17]

On 10 July the Board resolved that a tender from the contractors Smith and Knight for construction of the line should be accepted, although no details of the tender are recorded. In response, Morton Peto wrote to the Board on 28 July offering his resignation so he could tender for the Contract. His resignation was accepted.[17]

Continued difficulties in raising the finance meant that two new Bills were drafted and put before Parliament, one to continue construction but with an extended deadline for completion and the other to abandon its construction. On Peto's advice, the decision on which should be adopted was deferred until the next half-yearly shareholders' meeting in February 1858.[17]

Assuming that construction would go ahead, Peto in partnership with Brassey and Betts produced a tender for the contract with three costings (in each case prices included stations costing £22,500; the Contractors would accept £240,000 in shares as part of the consideration):[17]

On 1 August 1861, the West Midland & Severn Valley Companies Act authorised the construction of the Kidderminster Loop Line and granted the Company powers to raise an additional £60,000 and borrow up to £20,000 to fund its construction. However the Tenbury line was still several years from opening, so no action had been taken by 1863 when responsibility for the Loop Line passed to the GWRGreat Western Railway[20].