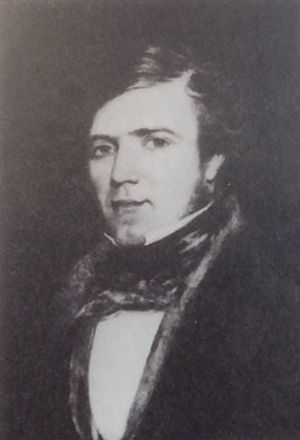 Robert Nicholson
Robert Nicholson (1808-1855) was the Engineer who drew up early plans for the Severn Valley Railway, although he died before construction began.

Robert Nicholson was born on 31 August 1808 at Horton Grange Low House, Northumberland and was educated in Newcastle where he displayed a flair for mathematics. At the age of sixteen he was apprenticed for five years to a Mr Grace, a farmer, land agent and surveyor. While an apprentice, he assisted "Father of the Railways" George Stephenson with surveying the Liverpool and Manchester Railway.

Having trained as a chartered surveyor, Nicholson continued to work for Mr Grace for some years, principally as a surveyor of turnpike roads and other local business. He subsequently became a close associate of George Stephenson's son Robert Stephenson and worked on a number of Tyneside railway projects, including;

Nicholson became a member of the Institution of Civil Engineers in 1838.[1] He continued to work on other projects as well as railways. He helped plan and build the Whittle DeanWilliam Dean, Chief Locomotive Engineer of the Great Western Railway 1977-1902 Waterworks for which he also continued to act as Engineer and Manager until the time of his death. Between 1848 and 1850 he was employed to take a bill through Parliament to remove the government of the River Tyne from Newcastle Corporation. In 1852 he developed plans for supplying the City of Doncaster with water[2].

Involvement with the Severn Valley Railway

In 1846 Robert Stephenson assisted by Frederick Swanwick had prepared a plan and section for a railway between Worcester and Shrewsbury for the Shropshire Union Railways and Canal Company.[note 1] Following the failure of that scheme, a number of individuals employed Robert Nicholson to carry out another survey of the potential route for the Severn Valley Railway in 1849. By that time the Oxford Worcester and Wolverhampton Railway had been planned, so Nicholson's first plan began from a junction south of Hartlebury rather than at Worcester itself. After passing north of Stourport it closely followed Stephenson's earlier route until near Quatford, a short way south of Bridgnorth, where it deviated to the east and crossed the River Severn to avoid the Apley Estate owned by Thomas Whitmore, ending at Coalbrookdale near Ironbridge.

When the Board of the Severn Valley Railway Company met for the first time on 25 August 1852,[note 2] Nicolson was appointed Engineer. He took part in the public meetings including that at Bewdley on Friday 8 October where strong feelings were expressed that the railway should go to Shrewsbury rather than Coalbrookdale. On 13 October 1852 the Board accepted this proposal and Nicholson was instructed to prepare and cost the design of the route.[3] Around that time Nicholson became one of the first subscribers in the Severn Valley Railway Company, investing £5,000. Nicholson's revised plan was included in the first Severn Valley Railway Bill which was deposited in November 1852.[4] Between May and June 1853 Nicholson appeared before the Commons Parliamentary Committee in support of the bill, leading the expert witnesses.[5] He also appeared before the Lords Select Committee in early August, where he spoke at length about the problems and expense caused by Thomas Whitmore at Apley. He also testified that he was aware of Robert Stephenson's 1846 survey and had 'been over it in 1847 and 1848' before completing the survey in 1849. Helped by his testimony, the first Severn Valley Railway Act was duly enabled on 20 August 1853, resulting in the incorporation of the Severn Valley Railway Company.[6]

Following incorporation of the Company, Nicholson's appointment as Engineer was confirmed in Board meetings during September 1853, initially on an annual salary of £1,000 plus £200 expenses. However it quickly became obvious that cost savings would be required. At a Board meeting on 27 October a deviation was proposed to join the Shrewsbury & Hereford Railway at Sutton Bridge Junction, for which Nicholson drew up a revised plan and section for submission in a new Bill in 1854. Continuing financial difficulties led the Board to decide on 13 February 1854 not to proceed with the Bill beyond the Commons stage. On 4 April 1854 Nicholson's annual salary was withdrawn; in future he would be paid only his professional expenses.[7]

Nicholson continued to prepare proposals for the revised route to be incorporated in the second Severn Valley Railway Bill to be submitted in the 1855 session of Parliament. This would include the deviation to join the Shrewsbury & Hereford Railway at Sutton Bridge Junction and a revised route between Stourport and Bewdley incorporating Mount Pleasant Tunnel. On 17 July 1845 he was asked to see what arrangements could be made with Thomas Whitmore for compensation for the Railway through the Apley Estate on the opposite bank of the Severn. The new plans and sections were deposited on 30 November 1854.

Following submission of the Bill to parliament in November 1854, Nicholson continued to work on other projects, including the Border Counties Railway. While giving evidence in London on the Liverpool Waterworks Bill he caught a cold which developed into a serious illness, probably due in part to his being weakened by overwork. He died at his home in Newcastle on 9 May 1855 at the early age of 46.[8]