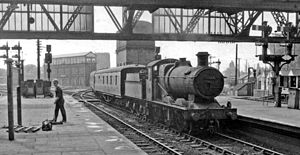 Shrewsbury is the county town of Shropshire, situated on the River Severn. Shrewsbury station, formerly known as 'Shrewsbury General', is a major junction between various GWR and LNWRLondon & North Western Railway routes, and was the northern terminus of the Severn Valley Railway, which connected it to Bridgnorth, Bewdley and Hartlebury[1].

Shrewsbury was the northernmost station on the Severn Valley Line until the cessation of passenger services between Bewdley and Shrewsbury and closure of the line north of Alveley Colliery in 1963. The SVRSevern Valley Railway line diverged from the Shrewsbury-Hereford line at Sutton Bridge Junction, which still exists today as the junction for the former Cambrian Railways line to Aberystwyth and Pwllheli [2]. Severn Valley line services generally used the now-closed bay platforms 1 and 2 at Shrewsbury station.

A short stub of the SVRSevern Valley Railway was kept open until July 1988, in order to service an oil depot on the site the Shropshire and Montgomery railway's Shrewsbury Abbey station, a connection to the depot being built in 1960[2].

Adrian the Rock - Signals at Shrewsbury