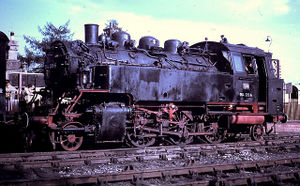 The DRG Class 64 was a standard passenger train tank engine with a wheel arrangement of 1'C1' (UIC classification) or 2-6-2 (Whyte notation). This locomotive was built by the German firm of Krupp in 1934 for the German state railway Deutsche Reichsbahn-Gesellschaft (DRG).

Its first allocation in 1934 was to Köln at Geldern shed for use on local passenger services. In March 1943 it transferred to Nürnberg at Würzburg shed, initially on passenger work and later on freight. At the end of World War Two it came under the “Deutsches Bundesbahn” (DB) West Germany State Railway under which in 1950 it received its first major overhaul since 1938. It was then allocated to Aschaffenburg, Bavaria working services to Darmstadt, Frankfurt, Gemunden and latterly Miltenburg. It transferred to Weiden shed, also in Bavaria, and its final months were spent on works trains at Weiden depot, also in Bavaria, last working on 18 March 1974[1][2].

Number 305 was purchased for use on the SVR by the ‘German 064 Klasse Fund’ on 27 May 1974 at a cost of £2,724. In September 1974 the loco was moved from Weiden depot near the Czech border to Stolberg for storage until the funds for the purchase price and transport costs could be raised.[3] The purchasing group confirmed that some modifications would be required including fitting of a vacuum brake in addition to the existing air brake. They had also been made aware of a recent Department of the Environment (DoE) requirement for the locomotive to be "superimposed" passing under bridges and through platforms at 5 m.p.h. and maximum line speed to demonstrate clearances, and had written to Germany for help on this matter.[4]

On 8 February 1975 a party from the SVR numbering around 25 visited Stolberg to inspect the loco.[5] In spring 1975 a raffle organised by the SVRA Wolverhampton Branch helped raise funds for the German Tank Fund.[6] On Thursday 26 June 1975 the locomotive was hauled by rail from Stolberg to Raeren in Belgium, the move through West Germany being steam hauled by 052 928-9. The following day the journey continued to Zeebrugge. On Monday 30 June the locomotive was loaded on the rail ferry and shipped by sea to Harwich where it was transferred into a siding. The locomotive left Harwich by road on 15 July 1975, after a delay in finding a suitable road route for the final part of the journey. The journey to Bridgnorth was completed on 16 July 1975 after an overnight stop.[3]

By autumn of 1975 305 had been successfully steamed on 4 occasions but with moves confined to Bridgnorth yard.[7] The locomotive subsequently recorded 5 miles of travel, believed to have been a return trip from Bridgnorth to Eardington, of which three photographs are shown below. It transpired that the measurements of the locomotive that had been provided prior to purchase were incorrect, and also that the Severn Valley Railway had not been built to standard GWR gauge as had been assumed Significant modifications to track alignment and platform clearances would have been necessary throughout the line, or major changes would have been required to the locomotive’s profile, notably cutting back the tank and cab sides and lowering the cab roof. A kinematic envelope of the locomotive’s profile against all structures down the line would then have to be produced before DoE permission could be obtained for the locomotive to enter service. The Fund’s shareholders therefore decided to sell the locomotive, so in 1977 the locomotive found a new home on the Nene Valley Railway which had been modified to cope with locomotives built to continental loading gauge.[8]

Restoration of the locomotive was subsequently completed at the Nene Valley, after which it saw regular service on the line and featured in several films. It was taken out of traffic in 1987, following which its air pump was used by Flying Scotsman during that locomotive’s tour of Australia in 1989-90. 305 is now stored at Wansford awaiting overhaul[9].

All photos by David Cooke.

Three photos of 64 305 on a test run back from Eardington, its only known movement outside of Bridgnorth.