The SVRSevern Valley Railway's Kidderminster Town Station which opened in 1970 was built on the former goods yard of Kidderminster mainline station. The mainline station opened as part of the Oxford Worcester and Wolverhampton Railway in 1852 and become a direct destination for services from the Severn Valley Branch and Wyre Forest Line in 1878. Today it is managed by West Midlands Railway and forms part of the Birmingham to Worcester line. It has two platforms, with the main station building located on Platform 1, the DownIn reference to the direction of travel means away from the major terminus (i.e. towards Bridgnorth on the present day SVR) (northbound) platform. The SVRSevern Valley Railway and mainline stations are less than 100 yards apart and share the same station approach road. 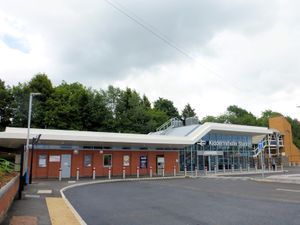 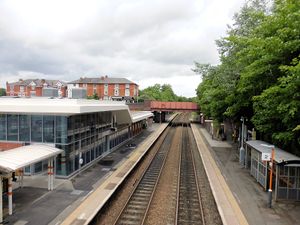 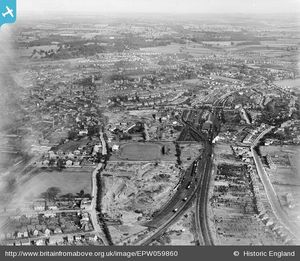 A 1938 aerial photograph of Kidderminster, showing the area around the station, the extensive goods yard, and the junction between the mainline from Hartlebury (right) and the Kidderminster loop line from Bewdley (left). Image from Britain from Above

The Kidderminster mainline station was built as part of the Oxford Worcester and Wolverhampton line between Stourbridge and Evesham which opened with a special train on 1 May 1852, with normal services beginning 2 days later.[1] At opening, both platforms ended at the Comberton Road bridge. The station building was a simple wooden structure which soon proved inadequate and was replaced in 1859 by a second building, also of wooden construction. This was described in a contemporary newspaper article as "…but one story in height, and comprised a booking office, two waiting rooms, a telegraph office, and closets, the entrance for passengers being by a door between the booking office and the waiting room. At the southern end was the telegraph office, a small compartment partitioned off from the booking office, and at the northern end, but detached at a distance of about three yards, was another wooden building, of recent erection, occupied by Mr. Done, of Kidderminster, as first and second-class refreshment rooms."[2]

On 1 July 1860 the OWWOxford Worcester and Wolverhampton Railway became part of the West Midland Railway (WMR) (a short-lived company not to be confused with the present operators of the station). The opening of the Severn Valley Railway on 1 February 1862 had no direct impact on Kidderminster, which could only be reached via a change at Hartlebury.

On the night of 14-15 February 1863 the second station building was destroyed by fire. Within days the OWWOxford Worcester and Wolverhampton Railway began construction of a third station building, which was substantially complete by May. A contemporary newspaper report noted that this "…will consist of a central building in the Elizabethan style, two stories high. This will comprise the booking offices and station-master's residence. To the left of this will be the waiting-rooms, and to the right the refreshment-rooms, offices, porter's-rooms, etc. The foundation is of stone, upon which a wooden framework is built filled up with bricks. The wooden portion is to be stained and varnished, and the brickwork covered with cement."

The GWRGreat Western Railway opened the loop line to Bewdley on 1 June 1878, giving direct access to Kidderminster from Bewdley and stations further up the Severn Valley Branch and Wyre Forest Line. In anticipation of the additional traffic this would bring, new buildings were added to the UpIn reference to the direction of travel means towards the major terminus (i.e. towards Kidderminster on the present day SVR) (southbound) platform during 1877-78, including a general waiting room, a ladies waiting room, luggage and porters rooms. A footbridge was also installed to connect the two platforms.[2]

By 1900 there had been an upsurge in excursion traffic to places like Blackpool and the Welsh coast resorts. In that year, in order to cater for longer trains, the northbound platform was extended beyond the Comberton Road bridge to create the "Excursion Platform" as it became known, with an additional access ramp from Comberton Road.[2] The extension required the re-siting of the Kidderminster Station signal box which was demolished and rebuilt a few feet nearer the running line to improve visibility for the signalman.

Following complaints from the Chamber of Commerce in 1913 of delays in collecting goods from then station due to a shortage of yard space, it was reported in 1914 that they were satisfied with the improvements being made in siding accommodation.[4][5]

In 1917 the Comberton Road bridge was widened and the southbound platform extended under bridge[2].

GWR staff records for 1922 show the station had a staff of 57. This did not include those working in the goods depot, the locomotive shed (footplate men, fitters etc.) and Permanent Way department.

In 1923 it was reported that plans had been approved to increase siding accommodation at a cost of £10000.[6]

In 1937 it was announced that "The sidings at Kidderminster are to be remodelled and new goods loop lines are to be added to facilitate the working of trains between there and Worcester."[7]

By the 1940s, nearly 300 railwaymen were employed at Kidderminster in various capacities including the passenger station, goods depot and goods yard, locomotive shed, traffic department, P-way and S&TSignals & Telegraph.[8]

September 1962 saw the end of passenger services north of Bewdley on the Severn Valley Branch, although they continued around the Kidderminster / Bewdley / Hartlebury triangle until January 1970.

In 1968 the 1860s station building was demolished due to dry rot, while the footbridge was also demolished. The simple BRBritish Rail or British Railways brick building which was built to replace it opened on 3 July 1974.[2]

A new footbridge in the mainline station was opened in 2009. In 2018 work began on a major upgrade which included reconfiguration of the existing road and forecourt area as well as demolition and replacement of the 1974 station building.[9] The new station building was opened on 7 June 2020[10].

The yard handled general goods traffic from the Severn Valley and Tenbury branches and elsewhere. By the mid-20th century the main local industries served were Carpets (jute from Dundee arriving, finished products leaving) and Sugar (beet, limestone and coal arriving, refined sugar and molasses leaving). The yard was extremely busy, with shunting taking place continuously from 6.00am on Monday to 2.00pm on Sunday.[12] The 1946 Service Timetable included the following details:

The yard's main goods shed now serves as the SVRSevern Valley Railway's Carriage Repair Works. During the GWRGreat Western Railway era, steam locomotives were prohibited from entering the goods shed. The GWRGreat Western Railway kept two shunting horses in a stable on the opposite side of the main line behind the carriage siding, one of which would be led across the tracks each day. Two men were required to manage shunting in the shed, one to tend the horse and the other the wagons. Messrs. Harvey & Co also employed a shunting horse to move wagons around their private siding.[14]

Kidderminster Railway Museum occupies a smaller warehouse built by the GWRGreat Western Railway in 1878 for grain and wool storage. The LMSLondon Midland & Scottish Railway, which had running rights in the area, had a depot known as a 'goods receiving office’ which was a short way from the station near the bottom of Comberton Hill.[15]

Thos. Bantock & Co. acted as the GWRGreat Western Railway's agent's representative at Kidderminster and also at Stourport and Bewdley.

Kidderminster had a small single-road locomotive shed which was situated close to the main line station, on the east side of the running lines opposite the main goods shed. The original shed, which was built by the OWWOxford Worcester and Wolverhampton Railway, dated from the opening of the station in 1852. It was of wooden construction and was closed at the north end. The 1885 map below suggests it was accessed from the south end via a turntable. It was rebuilt during 1899 as a through shed, accessed by a set of points with a head shunt as shown in the 1902 and 1924 maps.[16]

In February 1932 the small shed was closed and replaced by a new larger depot built on the south side of the line between Hoo Road Bridge and Worcester Road Bridge.[17] The 1938 map suggests the small shed and associated point work had been removed by that time.