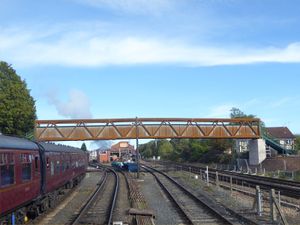 A footbridge has existed at this location since it replaced a level crossing in the 19th century.[note 1] One or more of the earlier bridges were of wooden construction, hence the bridge is still sometimes referred to locally as 'the wooden bridge'.[1] Peter Fursdon, a former footplateman at Kidderminster Shed in the 1950s, recalled it as being called the 'Black Bridge'.[2] A new bridge was installed in October 2022.

When the SVRSevern Valley Railway first reached Kidderminster in July 1984, SVR(H) bought from BRBritish Rail or British Railways the last section of the line to Kidderminster from the old boundary at Stourport Road Bridge, but at that stage had only leased the former Comberton Hill Goods Yard on which the station was built. The footbridge marked the boundary between the areas that the SVRSevern Valley Railway owned and leased.[3]

Following the successful extension of the railway to Kidderminster, an application to the Heritage Lottery Fund was submitted on 30 April 1997, titled the 'SVRSevern Valley Railway Heritage Project' for the Kidderminster Carriage Shed and other items. This included a proposed extension to the footbridge to allow better road and pedestrian access to the site. The HLFHeritage Lottery Fund (National Lottery Heritage Fund from 2019) requested a scaled-down application, and although the extension was still included it was ultimately dropped.[4]

The main picture (top right) shows the new footbridge on the morning of Sunday 16 October, a few hours after it had been lifted into position, looking north towards the station with the bridge's west abutment on the left.[note 2] The 2015 photograph above shows the same view of the former bridge. From left to right as seen, the track next to the west abutment allows pedestrian and vehicle access to the Diesel Depot and Carriage Shed south of the bridge. The two lines to the left lead to the platforms at Kidderminster. To the right is the line leading to the connection to the main line and to the Carriage Repair Works. Beyond the fence is the Network Rail main line from Hartlebury to Kidderminster, originally part of the OW&WOxford Worcester and Wolverhampton Railway.

Long-mooted plans by Network Rail to replace the footbridge received financial approval in 2021, with works originally programmed from December until May 2022. The design of the new bridge is a single-span constructed in 'weathering steel' with new concrete abutments at each end. Network Rail's plans, in conjunction with the SVRSevern Valley Railway's need to prepare the Bridgnorth MPD for the upcoming Roof and Crane project, led to the start of the SVRSevern Valley Railway's 2022 operating season being delayed until the beginning of April 2022.[6]

The old bridge spans were lifted out and the central pier were demolished in the early morning of Sunday 13 February 2022. Demolition of the west abutment was completed the following day, with the footpath embankment being dug away to allow for the excavation of the pier base. The east abutment was demolished over the weekend of 12-13 March. A 9-minute timelapse video of the removal of the old spans is available on YouTube.

The installation of the replacement bridge was delayed and eventually rescheduled for the weekend of 8-9 October 2022. By coincidence, a national rail strike on the Saturday meant that no train movements were taking place on the main line that day. The SVRSevern Valley Railway granted a 'total possession' to the contractors, allowing a large crane to be positioned on the SVRSevern Valley Railway's running lines to carry out the lift in the early hours of Sunday 9 October. However, problems with the paperwork involving the Police escort of the bridge to the Railway meant that only the two sets of end steps were delivered, with the Western steps being installed and the East set placed ready for installation. The rest of the work was delayed until the following weekend. The main span was eventually delivered to site on Friday 14 October. the 40 ton bridge was lifted initially to allow the fitting of the smoke plates, however due to issues lining up the bolt holes, this was abandoned due to time constraints and the bridge was lifted into place at around 5.00am on Sunday 16 October, followed by the eastern steps. Both sets of lifting operations were relayed live on YouTube via the SVRSevern Valley Railway's Railcam.

The main span of the bridge is made from weathering steel. The alloy steel will be allowed to form a patina of rust crust, which will form a protective layer over the steel acting as its protection system. This is now a common construction material for Network Rail bridges as in theory the bridge should never need painting. It is expected to take 5 years for the bridge 'crust' to be 'mature'. The stairs and inside of the parapets are painted holly green.

The SVRSevern Valley Railway's aspiration to extend the bridge to give access from the station to the turntable remains an aspiration, due to a lack of funds[7].