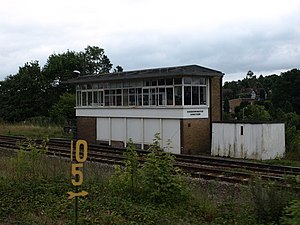 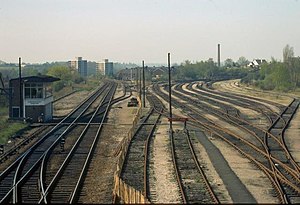 On 29 August 1877, as part of preparations for the opening of the loop the following year, the GWRGreat Western Railway authorised expenditure for completion of the block system between "the north and south boxes at Kidderminster" as well as block and single needle telegraph apparatus for the new line itself.[1] The "south box" presumably referred to a new box built to control the junction, with the"north box" being the main signal box in the station itself. The first Junction box was perhaps McKenzie and Holland with a 35 lever frame, replaced by a new 40 lever frame circa 1912.[2]

The illustration opposite shows two extracts from OS maps of the junction. In the 1903 map, the building to the east of the main line immediately south of the "Wooden Bridge" (FB) is not given the usual "SB" label, but appears to be the original Junction signal box. At least one subsequent map[3] did include "SB" for that building.

A later 1938 OS map which is reproduced as Fig. X in "Western Main Lines, Worcester to Birmingham via Kidderminster" (Mitchell & Smith) shows a signal box at a location further south, beyond the signal post (SP), with the original box no longer present. Narrative in the book accompanying the 1938 OS map extract refers to "The 1924 Junction box". The Signalling Record Society Website provides the information that "A replacement GW type 28B box was built here in December 1937".

The most recent signal box was of quite a modern design, having been built in October 1953, and contained a 63 lever frame. The GWRGreat Western Railway 1937 signal box on the same site was demolished by a derailed wagon earlier in 1953, and a temporary signal box was used for a short while until the replacement was built[4][5].

In August 2012 Network Rail carried out an upgrade of signalling in the area, whereby responsibility for signalling was transferred to the West Midlands Signalling Centre (WMSC) at Saltley. Following this upgrade, Kidderminster Junction signal box was closed on 24 August 2012 and was then demolished on 22-23 September 2012. The lever frame from the box has been saved by the SVRSevern Valley Railway for spares and as a possible new frame for a new Bridgnorth Signal Box.