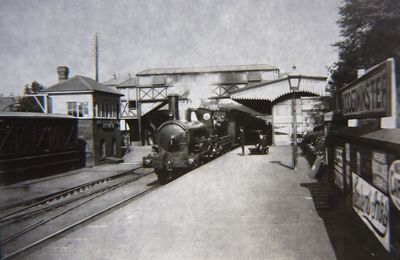 Kiderminster Station circa 1880
Kidderminster Station signal box (not to be confused with the SVRSevern Valley Railway's present day Kidderminster signal box, which now bears its nameplate) was located at the southern end of the DownIn reference to the direction of travel means away from the major terminus (i.e. towards Bridgnorth on the present day SVR) (to Birmingham) platform on Kidderminster mainline station. It was built to a McKenzie & Holland type 1 design and opened circa 1873.[1] On 5 February in that year the GWRGreat Western Railway had authorised the interlocking of points and signals at Kidderminster, the first mention of such interlocking in the district.[2]

In 1877-78 a footbridge was built connecting the two platforms. Although its positioning obscured part of the view from the signal box, thus contravening the Board of Trade requirements that "the signalman should have the best possible view of the railway and be able to see the arms and lights of signals and working of the points", the situation was allowed to remain unchanged.[3] The picture, dated to around 1880,[1] shows the location of the box relative to the new footbridge; the Comberton Road Bridge is just visible in the distance between it.

The visibility issue was made worse in 1900 by the extension of the DownIn reference to the direction of travel means away from the major terminus (i.e. towards Bridgnorth on the present day SVR) platform north of the Comberton Road Bridge (the "Excursion Platform") with its associated signalling. The signal box was therefore dismantled brick by brick and rebuilt nearer to the running lines.[3] Much of the existing material was retained, although differences included the shape and size of the locking room windows, the addition of five courses of facing bricks around the base, two ventilation pipes in the roof for the oil or gas lamps, and a timbered walk-way instead of a trap door covering where the signal wires and point rodding exited the locking room.[1]

The Station box worked directly to Kidderminster Junction Signal Box until 15th July 1973 when the former was closed and its area of control came under the Junction Box. Its frame, a 30-lever GWRGreat Western Railway 3-bar vertical tappet frame of 1913, was then transferred to the ex-LNWRLondon & North Western Railway box at Arley