The village of Jackfield, which lies around ¾ mile south east of Ironbridge, is notable for its place in the Industrial Revolution. After the arrival of the Severn Valley Railway, Jackfield sidings served a number of the local brick and tile works as well as other industries. The sidings were progressively extended; by 1900 reaching almost ½ mile in length and containing three ground frames, each controlling the local points and signals. Although much goods traffic made use of the sidings, there was no provision for passenger traffic until the arrival of the first Jackfield Halt in 1934. This was located towards Coalport, between the Jackfield sidings and the private sidings of Maw & Co[1].

Note: The names of the ground frames reflect the overall north / south layout of the Severn Valley Branch, with Ironbridge and Shrewsbury being to the north. Geographically, Jackfield sidings were orientated closer to east / west. 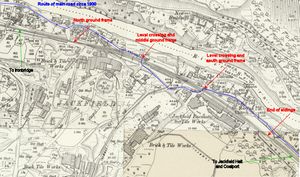 The OS Map shown was published in 1902. The locations of the three ground frames are marked in red and the route of the 'main road' through Jackfield at that time is highlighted in blue. A number of tramways can be seen providing connection to the sidings for businesses in the area. 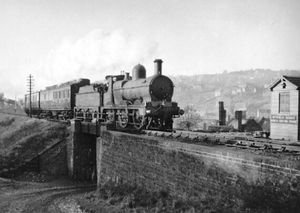 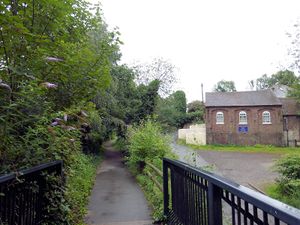 Access to the sidings at the Ironbridge end was controlled by the north ground frame which was located near the Weslyan chapel. The ground frame hut can be seen in the picture of a Dean Goods crossing the underbridge which gave road access to the chapel.

The former trackbed is now shared by the Severn Valley Way footpath and National Cycle Route 45. The railway bridge has been replaced by a narrower pedestrian footbridge. The present day view from the new bridge looking east shows the former Wesleyan chapel; the ground frame would have stood on the left on the picture. 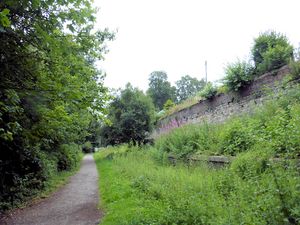 Travelling south-east, the Railway and sidings then passed the W.P. Jones Tileries to the south of the line (marked "Brick & Tile Works" on the map). The factory, now demolished, would have been visible above and behind the chapel in the first present day photograph. The second present day view, around 100 yards beyond the chapel, shows the retaining wall above which the factory stood. Below the retaining wall is what is sometimes stated to be the remains of a passenger platform but is actually part of the sidings. The Black Swan public house (marked "PH" on the map) which lies on Lloyds Head, the road from Ironbridge towards Jackfield, is behind the hedge on the left. The level crossing gates at the site of the middle ground frame are just visible in the distance. 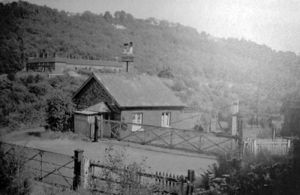 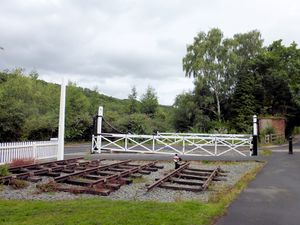 The middle ground frame, which lay approximately 220 yards from the north ground frame, stood next to a level crossing where Lloyds Head crossed from the geographical north to the south of the line. The crossing gates spanned three tracks, the Severn Valley Branch itself and two main siding lines. A crossing keeper's cottage can be seen next to the crossing in the photograph which was taken shortly after closure as the rails are no longer present.

The crossing keeper's cottage was demolished some years ago. The crossing gates, which are 38ft in width, were restored by Telford and Wrekin Council in 1999 as part of an upgrade of the Severn Valley Way footpath. The 'railway heritage area' was created at the same time with the assistance of the Jackfield Residents Association[2]. The gates are included in the Shropshire Historic Environment Record as a listed structure. 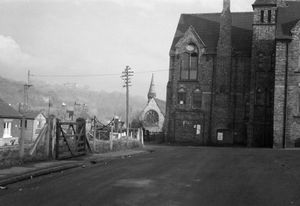 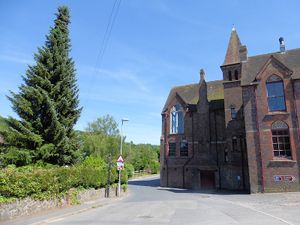 Beyond the level crossing, the main road becomes Church Road. Around 200 yards further on, the road crossed back to the north of the running line and sidings via a second level crossing controlled by the south ground frame. The crossing was situated next to the western end of the Craven Dunnill tile works (marked "Jackfield Encaustic Tile Works" on the map). In the picture by John Piper, the ground frame hut can be seen on the left next to the crossing keeper's cottage. The crossing gates appear to have been of an unusually ornate design. The railway and sidings continued between the tile works and St Mary's Church, while the road passed behind the church and closer to the river.

The photo taken in 2018 shows a similar view of the locality. The Craven Dunnill works is now occupied by the Ironbridge Gorge Museum Trust's Jackfield Tile Museum. Beyond the site of the crossing the main road ("Saltwells Road") now follows the route of the former railway line between the factory and the church. 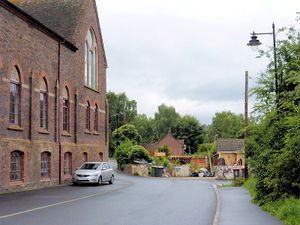 The view in 2020 is looking back towards Ironbridge from near the church. The former crossing cottage can be seen on the right, while to its left a house now stands on the former trackbed between the south and middle ground frames. The crossing cottage is recorded in the Shropshire Historic Environment Record. 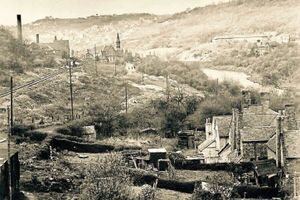 Southern end of Jackfield sidings circa 1900

The OS map shows the sidings continuing to the eastern end of the tile works, although there does not appear to have been another ground frame at that point. In the view of the Jackfield area circa 1900, the route of the line between the Craven Dunnill works and the church can be seen with the crossing keeper's cottage visible between the two.

The area immediately south of Jackfield sidings, which included Jackfield Halt, suffered a major landslide in spring 1952. A land stabilisation program in the area was completed in 2016. The view at that time is from the former trackbed, now the Severn Valley Way, and shows the route of the line continuing into what is now Saltwells Road between the works and the church.

A signal box from the Jackfield sidings has been preserved as part of David Buck's private railway at Fifield[3].