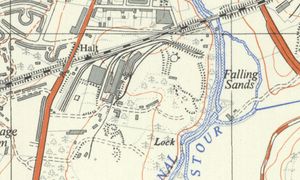 Foley Park is an area of Kidderminster through which the Kidderminster Loop Line runs. The sidings for the British Sugar Corporation’s factory were situated to the south of the line between Falling Sands Viaduct and the Stourport Road Bridge. Access to the sidings was controlled by a ground frame. Ground frames have also been used for other purposes at Foley Park.

Access to Foley Park sidings was achieved by a ground frame. A description of the arrangements is contained in this extract from the "Instructions for working to Sugar Beet Factory Sidings, Appendix to Service Timetable, February 1943."[1]


1. The four sidings adjoining the single running line at Foley Park are available for use for traffic purposes

The extract from Ordnance Survey Map SO87, surveyed 1938 - 1949, published 1951, shows the layout of Foley Park sidings and the location of the nearby Foley Park Halt.

In March 1977 Major Olver of the Railway Inspectorate approved the section between Bewdley and Foley Park for SVRSevern Valley Railway passenger use (this normally took place only during galas, as services had to be ‘top and tailed’ due to the absence of a run round loop at Foley Park). To control access between BRBritish Rail or British Railways and the SVRSevern Valley Railway, two sets of points were moved from Alveley Sidings to Foley Park in early 1977 and installed on the single line adjacent to the sidings to act as trap points, one in each direction.[2]. Two two-lever ground frames were also installed at 136m 10ch; each controlled a single trap point and associated FPLFacing Point Lock, equipment that physically locks points so that they cannot move., with an SVRSevern Valley Railway GF controlling traps in one direction, and a BRBritish Rail or British Railways GF controlling traps in the other. The ground frames can be seen in this photograph: Link. 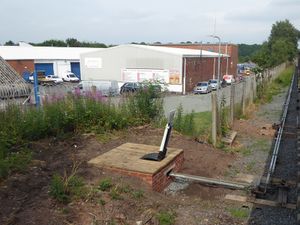 Over the winter of 2019/2020, during track relaying, the SVRSevern Valley Railway took the opportunity to install the refurbished ex-Kidderminster ground frame at Foley Park, in preparation for possible future uses of the site. These include a possible future station serving the Safari Park and developments on the former sugar works site, and the proposed Wagon shed.

The new ground frame at Foley Park Sidings will allow access to the new sidings either out of hours or with the boxes open. For a train to leave the sidings, the Shunter will ring Kidderminster box and ask for a ground frame release. The Kidderminster signalman will send an appropriate bell code to Bewdley South who will reverse his Acceptance Lever. This will provide a release for either the section signal (as now) or the key control instrument. The latter will release an Annett's key at the ground frame to unlock it. Once the ground frame is locked up again, either with the train on the main line ready to depart or locked inside the sidings with the single line section clear, and the Shunter has been advised that all is in order, the Kidderminster signalman will send an appropriate bell signal to Bewdley South either cancelling the train (once it is either locked inside or has arrived at Kidderminster) or intimating it is about to leave for Bewdley. An UpIn reference to the direction of travel means towards the major terminus (i.e. towards Kidderminster on the present day SVR) or DownIn reference to the direction of travel means away from the major terminus (i.e. towards Bridgnorth on the present day SVR) train stopping in section at the sidings would be signalled normally but the Shunter would telephone the Kidderminster signalman on arrival once the train was at a stand clear of the siding points for a ground frame release and then proceed as above.[3]

How the signal box diagram will look once the ground frame has been installed[4].: