From SVR Wiki
(Redirected from GWR 4141)
Jump to: navigation, search

GWRGreat Western Railway CollettCharles Benjamin Collett, Chief Mechanical Engineer (CME) of the Great Western Railway 1922-1941 5101 class 'Large PrairieLocomotive with a 2-6-2 wheel configuration' 4141 is a classmate of SVRSevern Valley Railway-residents 4150 and 5164. It was resident on the SVRSevern Valley Railway between 1973 and 1988, although restoration was never completed.

Large prairie tanks were a common sight on the GWRGreat Western Railway, with more than 300 built between 1903 and 1949 to the same basic design. The locomotives were designed to haul semi-fast and suburban passenger services to tight schedules, and were also used on medium distance freight services. A number of the class were allocated to Kidderminster and Shrewsbury sheds and were regularly used on the Severn Valley Branch in its declining years. Classmate 4175 was involved in the fatal accident at Northwood Lane level crossing in August 1964.

4141 was built at Swindon to Lot 335 and out-shopped in August 1946. It was based at the Cheltenham and Gloucester (Horton Rd) depots for its entire working life which lasted less than 17 years. It saw use on Cheltenham to Kingham and Gloucester to Hereford trains.[1] It was first reported as withdrawn on 19 July 1962, although Control subsequently said they had no knowledge of this and that it was under repair. It was eventually withdrawn by BRBritish Rail or British Railways on 1 March 1963[2] and sent to Barry Scrapyard in August of that year. 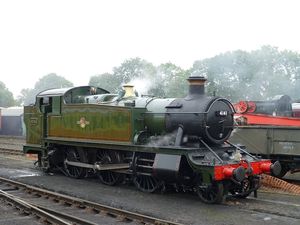 4141 in September 2013
In 1970 SVRSevern Valley Railway member Peter Waite expressed an interest in purchasing the locomotive and, with assistance from the '4141 Hampton Loade Locomotive Fund', 4141 arrived on the SVRSevern Valley Railway from BarryWoodham Brothers Scrapyard, Barry, South Wales. The source of many locomotives now in preservation. on 6 January 1973 in a convoy which also included 5164, 4930 Hagley Hall and 7819 Hinton Manor.[3]

After a brief period of storage at Bewdley, 4141 was towed to Hampton Loade by WD 193 Shropshire on a Friday evening in February 1973. On arrival at Hampton Loade 193 was suffering from water problems and was unable to carry out shunting operations, so 4141 was left in the up loop overnight. The only motive power available the following morning was the diminutive Hudswell Clarke Diesel Shunter D577 Mary. The siding was duly split near the platform end and slewed over to join a separate length of track on which 4141 was to be restored. Four wagons were marshalled between "Mary" and 4141 to ensure that the diesel did not travel on the new lightly laid track. "Mary" managed to push the convoy part-way up the incline before, for reasons then unknown, 4141 came to a halt and refused to move another inch. The following Sunday morning the larger Ruston and Hornsby 165hp Diesel Shunter 319290 arrived from Bridgnorth for another attempt. The problem was diagnosed as sticking brakes on 4141, soon remedied by the application of a sledge hammer, and the move of 4141 was completed. The siding was slewed back into position leaving 4141 on its isolated section of track.[4]

Later that year GWR 3467 Fruit D Van was acquired for the storage of spares for 4141.[5] Restoration by a small team of volunteers began and by 1976 work had been carried out on the main frame while the front pony wheel assembly had been removed, cleaned and painted. Wasted areas in the bunker had also been removed as had the chimney top for the fitting of a copper cap, and the B.R.British Rail or British Railways number plate brackets from the smokebox door. Strip down work had also begun on the boiler.[4]

By 1980 the wheel tyres and axle journals had been turned at Bridgnorth and the axle boxes re-metalled.[1] The bottom end overhaul had been completed by 1985.[6] However progress was slow and had effectively stalled by 1988. In that year the committee of the '4141 Hampton Loade Locomotive Fund' announced that 4141 had been sold to Professor JF Kennedy and that it was now their responsibility to return all monies to the respective shareholders.[7] By 1990 the locomotive had left the SVRSevern Valley Railway and was at Swindon.[8]

Restoration was eventually completed in 1998 when the locomotive was steamed on the Llangollen Railway. It moved to the Great Central Railway in 2003 where it operated until it was taken out of service around 2009 for boiler repairs. During that time it returned to the SVRSevern Valley Railway in 2007 for an appearance at the Spring Steam Gala.

In October 2012 the locomotive moved to its latest home, the Epping Ongar Railway. In 2017 it was sent to Loughborough for overhaul.