For passenger carriages, one letter indicated the class of carriage, normally F (First), S (Second, later Standard), T (Third) or C (CompositeCarriage having more than one class of seating, ie First and Third or latterly First and Standard., ie more than one class). A second letter would indicate the layout, typically O (Open) or K (Corridor). Thus a carriage with Third Class compartments off a corridor would be designated TK.

The letter T when used as a prefix to another carriage class meant ‘Tourist’, indicating 2+2 seating, for example TSO (Tourist Standard Open).

Carriages with catering facilities, or whose principal use was for dining, were normally prefixed R (Restaurant). B as a suffix indicated Buffet. Common forms included RB (Buffet with cooking facilities) and RMB (Restaurant Miniature Buffet, serving snacks). 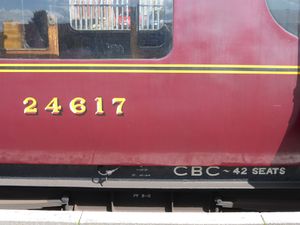 This category has the following 27 subcategories, out of 27 total.

This category contains only the following page.