From SVR Wiki
(Redirected from 78019)
Jump to: navigation, search 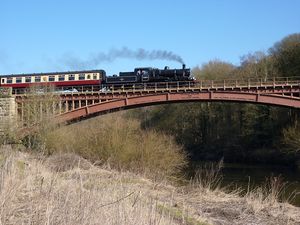 BRBritish Rail or British Railways Standard 2MTThe British Railways system of classifying steam locomotives by power using a number from 0, least powerful, to 9, most powerful, followed by either F for freight, P for Passenger or MT for Mixed Traffic. 78019 was resident on the SVRSevern Valley Railway between 1973 and 1998, and was a Gala visitor in spring 2010.

78019 returned to the SVRSevern Valley Railway as a gala visitor in spring 2010.