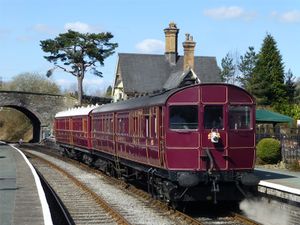 The GWRGreat Western Railway steam railmotor was a self-propelled carriage powered by a vertical boiler steam engine incorporated into a bogie at one end of the carriage. They were operated between 1903 and 1935 and could be used singly or with a trailer car. Many railmotors were later converted for use as autocoaches; the internal steam engine being removed and the carriage used in conjunction with an auto-fitted locomotive such as former resident GWR 1450. Steam Railmotor 93 was converted in this manner but has been returned to original condition as a steam rail motor by the Great Western Society at Didcot Railway Centre.

The introduction of electric tram services around the end of the 19th century provided competition with the railways for local passenger services. One such tramway was the Kidderminster and Stourport Electric Tramway which opened in 1879. The GWRGreat Western Railway, along with other railway companies, began to use railmotors to meet this competition. A steam railmotor was trialled between Kidderminster, Bewdley and Stourport on 29 December 1904. A full service using two railmotors was introduced on the same section on 2 January 1905, also calling at Foley Park Halt which opened the same day. Rifle Range Halt opened in June of that year and was also served by the railmotors. In January 1911 a third railmotor was introduced between Hartlebury and Bewdley. Use of railmotors on the Severn Valley Railway ended in 1918.[1]