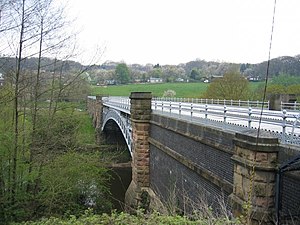 The Elan Valley Aqueduct[note 1] can be seen from the Railway where it crosses over the River Severn at Bath Coppice, just south of Folly Point between Bewdley and Arley. The aqueduct runs for 73 miles from the Elan Valley reservoirs in mid-Wales to Frankley reservoir near Birmingham. It was installed in the early 1900s and the water it brings is now used to supply the towns of Mamble and Tenbury as well as the City of Birmingham. No pumping is required as there is a height difference of 771 feet between the ends of the route which allows the water to flow under gravity at around 2 mph, taking a day and a half to complete the journey. At times of peak demand the supply is supplemented by water from nearby Trimpley Reservoir[1].

Parliament passed a Bill in 1892 approving a plan by Birmingham Corporation to build a series of dams and reservoirs in the Elan Valley to provide a clean supply of drinking water for the City of Birmingham. Work on the dams and reservoirs began in 1893, with construction of the aqueduct itself starting in 1896. The Chief Engineer was James Mansergh.

Crossing the River Severn required the construction of a large single-span bridge. After crossing the river, the water pipes run through a chamber underneath the railway before continuing uphill towards Birmingham; the location being the lowest point of a 17-mile-long inverted syphon whose two outermost points are level, with the water passing through under the pressure of the head of water behind.[2]

The first continuous flow of water from the Elan Valley through the aqueduct began on 28 July 1904, a week after the system was ceremonially opened by King Edward VII. The aqueduct initially consisted of two 42in-diameter pipes, with two additional pipes of 60in diameter being added in 1939 and 1961[2][3].

During 2014 Severn Trent Water identified that three of the pipes in the chamber underneath the railway were corroded and required replacement. With the agreement and cooperation of the SVRSevern Valley Railway, a project to carry out the work was undertaken over the winter of 2014-2015.

The project required the line to be lifted and replaced, and this was planned for the six-week shutdown between Christmas and half-term in February. With road access to the location being extremely limited, the SVRSevern Valley Railway arranged for all plant, equipment and materials to be delivered via the Railway from Bewdley. The SVRSevern Valley Railway also provided the use of Ruston shunter D2957 and crew, resulting in a rare opportunity for revenue-earning freight movement.

Unfortunately, several factors arose to delay completion of the work. In December 1968 an explosion at West Hagley, at a point where the pipelines cross the Kidderminster to Stourbridge railway, fractured two of four water pipes, after which the Water Authority had decided to flood the pipeline chamber under the railway with concrete to prevent a similar attack.[4] This needed to be removed slowly and carefully with high pressure water jet, so as not to damage the pipes which were still carrying water.[5] When the new pipes were ready to be installed, the contractors discovered there was an unexpected 18-inch gap between two of them, due to the prefabricated nature of the replacement pipes and the fact that the dimensions for the existing buried ones had to be obtained from drawings. This required a linking collar to be fabricated and welded into place. Despite 24-hour working, the track bed was not handed back to the SVRSevern Valley Railway until 3 p.m. on Saturday 14 February, some three days late. This meant the evening's Valentine's Day dining train was unable to use the full length of the line, with a full line service restarting on Tuesday 17 February. The SVRSevern Valley Railway negotiated a suitable financial compensation package for the overrun, in addition to which the car park at Bewdley was resurfaced with tarmac at no cost to the SVRSevern Valley Railway.[2] Severn Trent Water also became a corporate partner of Severn Valley Railway Charitable Trust Ltd.[5]

The old pipes remained at the site for several years, but were finally lifted onto wagons by the 30 Ton Steam Crane in April 2018 and moved to Highley. Photos of the move may be seen on the Bridgnorth Station website. A short section was retained with the intention of being restored for display in The Engine House.

The aqueduct briefly appeared in a scene in "Fire on the Line", the third story of the 1980 TV series God's Wonderful Railway.