Difference between revisions of "Victoria Bridge" 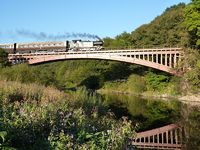 Victoria Bridge seen from the bank of the River Severn.

The bridge was designed by the Severn Valley Railway's chief engineer, John Fowler. It is largely constructed from cast iron; manufacture of the ironwork was subcontracted to the Coalbrookdale Company. The foundation stone was laid on November 24th 1859 by the SVRSevern Valley Railway's resident engineer, Henry Orlando Bridgman, and the bridge was completed in May 1861. Its span, of 200ft, was at the time the largest iron arch span in the country.[1]

After the pre-December 2008 refurbishment the bridge was re-opened by a young lady named Victoria Bridge from Cradley Heath. It was her first visit to the SVRSevern Valley Railway.

The bridge featured in the 1978 film The Thirty Nine Steps, in the scene where Richard Hannay (Robert Powell) escapes from a train and hangs beneath the bridge.

There is a near-identical railway bridge spanning the river Severn upstream at Buildwas. This bridge is known as Albert Edward Bridge.