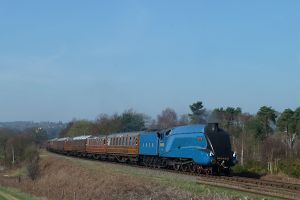 2012 Spring Steam Gala guest 60019 Bittern
The Spring Steam Gala is the smaller of the two annual enthusiasts' galas with visiting locomotives and a more intensive timetable, but without the all night running of the Autumn Steam Gala. This event is typically in late March and is now billed by the SVRSevern Valley Railway as "opening the season", even though trains commence for the February half-term week. The event incorporates three days of Gala from Friday to Sunday. Other common features include demonstration freight trains and shorter local, part-line services.

From time-to-time the SVRSevern Valley Railway publishes the number of Gala passengers, according to the method of counting these which has varied over time (for example, since 2010 documents sent to shareholders became valid as a ticket which did not need to be exchanged for travel.)[4]