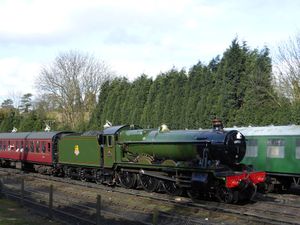 6990 Witherslack Hall, a BRBritish Rail or British Railways(W) 6959 Class 'Modified Hall', is owned by The David Clarke Railway Trust (DCRT) and is based at the Great Central Railway.[1]

The original GWRGreat Western Railway 4900 Hall Class, of which the SVRSevern Valley Railway’s 4930 Hagley Hall is an example, was first built in the 1920s. Frederick HawksworthFrederick Hawksworth, Chief Mechanical Engineer (CME) of the Great Western Railway 1941-1948, his successor as CMEChief Mechanical Engineer, produced the 6959 Modified Hall Class of which 71 were built between 1944 and 1950. A description of the Class can be found on the 6960 Raveningham Hall page.

6990 was completed in April 1948 at BRBritish Rail or British Railways’s Swindon works and on being out-shopped was selected to take part in the Locomotive Exchanges of 1948. It was used in the trials between Bristol and Plymouth but due to gauging issues in other regions, was only otherwise used on the former Great Central line from Marylebone to Manchester. Thereafter it was mostly based at London’s Old Oak Common shed working services out of Paddington, apart from a year stationed at Oxford and the final two years operating from Bristol. 6990 was withdrawn from BRBritish Rail or British Railways service on 17 December 1965, arriving at Barry Scrapyard in February 1966[1].

6990 arrived at the GCRGreat Central Railway in November 1975 having been purchased by the Witherslack Hall Locomotive Society and after restoration, entered service in August 1986. It was withdrawn for boiler repairs in January 1992, re-entering service in January 1996. After a further period out of service with boiler issues between 1999 and 2000, ongoing boiler problems led to a withdrawal for overhaul in 2001.

In January 2006 ownership of 6990 was transferred to The DCRT. A further period of service began in March of that year. On 8 October 2013 an exchange of tenders took place between the DCRT and the SVRSevern Valley Railway, allowing Hagley Hall to run with the correct Collet style tender formerly used by Witherslack Hall, which now instead uses the more appropriate HawksworthFrederick Hawksworth, Chief Mechanical Engineer (CME) of the Great Western Railway 1941-1948 tender formerly paired with Hagley Hall. Following another overhaul, the locomotive returned to traffic in 2015[1].

Appearances at the SVRSevern Valley Railway

Witherslack Hall, now complete with the HawksworthFrederick Hawksworth, Chief Mechanical Engineer (CME) of the Great Western Railway 1941-1948 tender, visited the SVRSevern Valley Railway in March 2016. The locomotive was unfortunately unable to take part in the Spring Gala, having suffered a hot box during running trials after delivery. However the locomotive was repaired in time to work service trains over the following Easter weekend, and is pictured awaiting ‘right away’ at Bridgnorth on Good Friday afternoon. It also worked service trains on a further two weekends.

The locomotive revisited on hire for the 2018-19 winter season, arriving on 28 November 2018 with a return to the GCRGreat Central Railway scheduled after 9 January 2019[2].