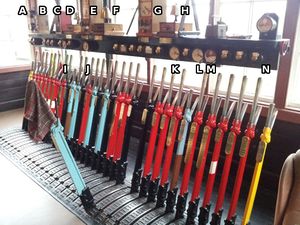 It is often possible to hear at least some of a signal box's bells when standing on the platform. Remember, though, that you will nearly always only ever hear the bell signals being received. When a signalman sends a bell signal, his own bells do not ring.

Bell signals are made up of groups of beats separated by pauses. They are written down as the number of beats in each group, with dashes for each pause. For example, '3-1' means three beats, pause, one beat.

The most common bell signal is probably the 'Call Attention' signal, used before nearly all other signals to alert the signalman that a bell signal is coming. It consists of just a single beat of the bell.

The largest group of signals consists of the "Is line clear..." signals, because there is a different signal for each class of train that a signalman might want to send. Some examples are:

There are also variants on these signals that indicate particular types of stock, or that are for SVRSevern Valley Railway-specific operational purposes:

Bell signals are also used by signalmen to inform each other about the passage of trains and for other reasons:

Not all codes are used by all signal boxes. E.g. Only boxes that may be switched out would use 5-5-7.